Inspired by a memorial from the Anna Warner Bailey Chapter of the Daughters of the American Revolution, Connecticut Governor, O. Vincent Coffin, on May 29, 1895, introduced to the General Assembly the first proposal for the adoption of an official State Flag.

On that same day the Assembly passed a resolution appointing a special committee to prepare a designation of the flag, one already generally accepted as the official flag of the state.

The General Assembly of 1897 provided an official description of the flag setting the dimensions at five feet, six inches in length and four feet, four inches in width, of azure blue silk, with the armorial bearings in argent white silk with the design in natural colors and bordure of the shield embroidered in gold and silver.

Below the shield there is a white streamer, cleft at each end, bordered in gold and browns, the streamer bearing in dark blue the motto "Qui Transtulit Sustinet." 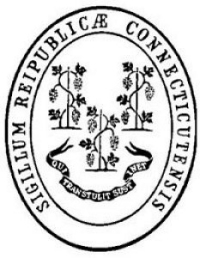 Great Seal of the State of Connecticut