The area of North America was originally inhabited by the Adena Culture, or (Mound Builders.) They lived here for thousands of years and remnants of their fascinating culture remain to this day.

Beginning in the 1670's, European adventurers crossed the Appalachian Mountains into an area that was then the western region of the Virginia Colony; land that the King of England originally granted (or gave) to a series of his friends.

By the mid-1740's, this undeveloped land (across the mountains) was being leased to European immigrants, and in some cases, sold. German settlers (squatters) from Pennsylvania began living along the south branch of the Potomac River - and though Native Americans and the French resisted - pioneers continued to move in.

During this general time frame, Great Britain and France continued their fight for dominance across North America. The resulting French and Indian War (1754-1763) caused the first settlements in Western Virginia to be abandoned and destroyed, as the British dealt crushing blows to the French and their Indian allies.

Although victorious against the French, the British were plunged into war debt. England's King, in a creative way to pay off that debt, decided to raise tax monies from his new colonies, and that decision was the genesis of the American Revolutionary War (1775–1783).

During that war, the small number of remaining settlers in Western Virginia were generally active patriots, and many served in the Continental Army.

As England and American colonists clashed over the ownership of what would become the United States of America, Native Americans joined the British side. Nearly a year after the main British army surrendered at Yorktown, Virginia, in 1781, bloody battles with the Indians continued in Western Virginia, including a major conflict at Fort Henry (present-day Wheeling).

Following the American Revolution, the aggressive settlement of frontier lands west of the Allegheny Mountains began. At first, pioneers settled along the major rivers before pushing further west, and by the turn of the century there was nearly 60,000 in the territory.

As Western Virginia continued to develop, increasing disagreements and tensions between the western and eastern areas of Virginia reached a fevered pitch, especially over such issues as slavery, taxation and equal governmental representation in Richmond.

Opposition to southern slavery in West Virginia was made famous by the raid on the federal arsenal at Harpers Ferry, led by the abolitionist John Brown. Slavery and States' Rights fueled the desire for independence across the South and those issues were the primary catalyst for America's bloody Civil War (1861–1865). When Virginia seceded from the Union in early 1861, and joined the Confederacy, the majority of citizens of Western Virginia decided to stay with the Union, thus declaring their own independence.

Because of that brave and controversial decision, the two were never reconciled as a single state again. The western region, after its refusal to secede was finally approved by the Supreme Court of the United States, was subsequently admitted to the Union on June 20, 1863, as an individual state. Officially named West Virginia, the 35th State's chosen motto - "Mountaineers Are Always Free" - certainly says it all. 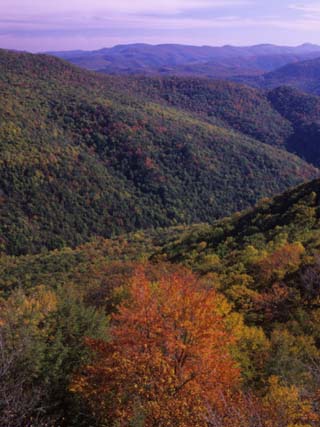 Otter Creek Wilderness...
by Adam Jones
Buy This at Allposters.com 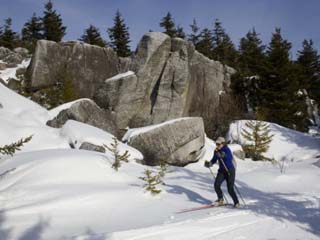 A woman skies across a field...
by Skip Brown
Buy This at Allposters.com 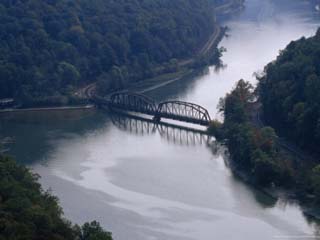 A railroad bridge crosses the New River...
by Raymond Gehman
Buy This at Allposters.com