Will Rogers once quipped, "Did you ever see a place that looks like it was built just to enjoy? Well, this whole State of Maine looks that way to me."

In fact, the stunning landscape of Maine is a by-product of the last Ice Age, as a massive glacier cut the straight coastline into hundreds of bays, inlets and harbors. The receding ice sheet also formed the 2,000 or so rocky islands along its toothy coastline.
Indian tribes inhabited this slice of land, like all of North America,  for centuries. Their peaceful harmony with the land ended when European exploration of the Americas began.

Five hundred years before Columbus discovered America, it is believed that Leif Ericson and a crew of Viking sailors explored the Maine coast, landed, and may have tried to establish a settlement.

In 1604 a French contingent that included Samuel de Champlain, the fabled explorer, were the first Europeans to settle here. They named this entire area Acadia, a stretch of land that included parts of eastern Quebec, the Maritime provinces, and all of New England.

The first European colony (Popham) was established in 1607. It lasted only one winter. It was followed by other English settlements in the early 17th century, settlements that were also ravaged by brutal winters and on-going Indian attacks; most did not survive.

In 1652, this loosely-organized territory became a part of the Massachusetts Bay Company, an English controlled colony centered in Boston. As France and England fought for control of what is now called New England, the district of Maine continued to grow as settlers by the thousands built homesteads.

The French and Indian Wars ended in 1763 with an English victory. That result subsequently ended all French claims to Maine and most of North America. Near the end of the 18th century, under English rule, the population of Maine had grown to more than 150,000 hearty souls.

The British saw an opportunity to tax the new-found wealth of their America's colonies, and Maine was no exception. Especially offended by the Tea Tax, powerful land owners and merchants in England's colonies rebelled, and they proudly (and bravely) declared their independence from Great Britain. 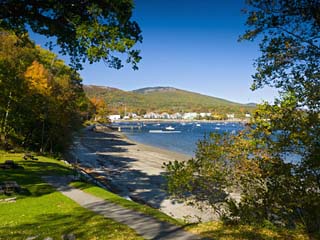 Camden, Maine...
by Alan Copson
Buy This at Allposters.com 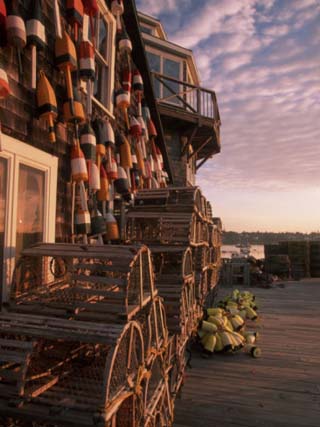 Early light in a small fishing village...
by Joanne Wells
Buy This at Allposters.com