People arriving over the Bering Strait from Mongolia about 13,000 years ago first populated the Pacific Northwest. Spanish and British sailors are believed to have sighted the Oregon coast as early as the 1500s. It is estimated that there were 125 distinct Northwestern tribes in the area at that time.

In the year 1775 Spanish Captain Don Bruno de Heceta sailed from Mexico all the way to the Canadian border, subsequently claiming all of the lands he visited for Spain. In 1790 Spain opened this huge territory to trappers and explorers of other nations, mainly Great Britain and the United States. British Captain James Cook charted some of the coastline in 1778 while seeking a water route (the Northwest Passage) that would connect the Atlantic and Pacific Oceans.

American Captain John Gray discovered the mouth of the Columbia River in 1792 and named it after his ship. He established a trade in sea otter pelts. President Thomas Jefferson sent Lewis and Clark overland to seek the Northwest Passage, and although they found the passage did not exist, they laid claim to the territory. Their expedition, along with Captain Gray's explorations, gave the United States a large stake in the land.

Britain's Hudson's Bay Colony established the first regional economy based on fur trading. The first capital of the Oregon Territory was built in Oregon City, at the northern end of the Willamette Valley. John Jacob Astor founded his fur depot in Astoria in 1811. The European fashion of beaver hats fueled the trapping and trading activities in Oregon and nearly decimated the population of beavers.

In 1819 Spain ceded their earlier claims on this land to the United States, although the British disputed it and the area existed for several decades under contentious joint control.

The Oregon Trail: A New Frontier

With the opening of the Oregon Trail in 1841, pioneers settled in the fertile Willamette Valley. Gold discoveries in the high country and along the coast led to further settlement. However, these provoked tragic wars with the Native Americans, which concluded with the Indians surrendering of all their lands.

Settlers met in 1843 to address the menace of wild animals. These "Wolf Meetings" led to a drafting of a constitution and the formation of Oregon's first government, which included both American and British participation. 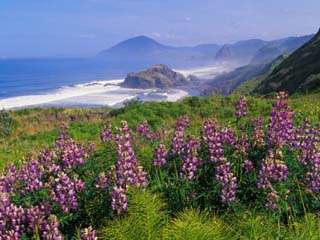 Lupine flowers along the southern Oregon coast...
by Adam Jones
Buy This at Allposters.com 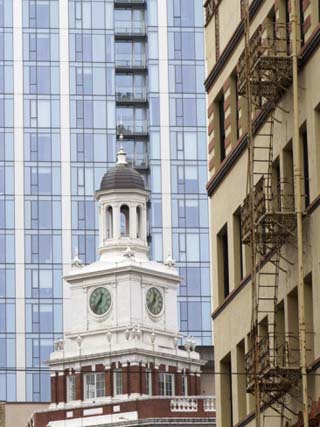 Architecture of Portland...
by William Sutton
Buy This at Allposters.com