Much like the U.S. State of West Virginia, the Adena Culture, also known as the Mound Builders, originally inhabited Ohio. These people lived in the Ohio Valley for many centuries and remnants of their fascinating culture remain to this day as an integral part of Ohio history. A variety of Native American tribes followed the Adenas into this fertile landscape; they lived happily on indigenous animals, beans and corn, but their idyllic lifestyle would soon change forever.

In 1669, the French explorer Robert de La Salle traveled through the Ohio River Valley; he claimed the entire area for France, and his King, Louis XIV. Soon the flood gates opened, and this land beyond the Allegheny Mountains proved irresistible, especially to the British.

In 1750, Christopher Gist, a surveyor for the British "Ohio Company" reported that "This Ohio Country is fine, rich, level land, well-timbered with large walnut, ash, sugar trees ... it is well watered and full of beautiful natural meadows, abounding with turkeys, deer, elk and most sorts of game, particularly buffaloes. In short, it wants nothing but cultivation to make it a most delightful country." A tempting testimonial indeed to would be settlers and entrepreneurs.

This land claimed by France and coveted by Britain, soon was ground-zero in the French and Indian War (1754-1763), as both European powers fought for total control of North America. In the end, the British dealt crushing blows to the French and their Indian allies.

Shortly after that conflict's end, the British placed this land above the Ohio River within the boundaries of Canada. That action, and new taxes imposed by England on the original thirteen colonies, were sparks that ignited the American Revolutionary War (1775–1783). 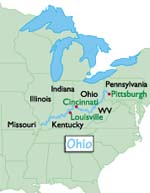 During the War for Independence, the remaining Native Americans fought on both sides of the conflict. When the British army finally surrendered at Yorktown, Virginia in 1781, the British (by terms of the 1783 Treaty of Paris) ceded all claims to the Ohio Territory.

In 1787, the United States formed a governmental region called the Northwest Territory. It encompassed all of its land to the west of Pennsylvania and northwest of the Ohio River, including present-day Ohio, as well as modern-day Illinois, Indiana, Michigan, Wisconsin and the northeastern edges of Minnesota.

With vast quantities of choice land now available, thousands of settlers (many from Pennsylvania and New York) arrived on barges and flatboats along the very-navigable waters of the Ohio River.

By 1801, the Ohio Territory's population surged to nearly 50,000. By 1802, because of its rapid growth, the U.S. Congress authorized the residents to form the state of Ohio and join the Union. A state convention drafted a constitution, and in 1803, Ohio entered the Union as the 17th state with Chillicothe as its first capital; Columbus became the permanent capital in 1816.

During the War of 1812, fought mainly over trade restriction imposed on the United States by Great Britain, Ohio played an important role. During that war the United States Navy engaged Great Britain's Royal Navy in the Battle of Lake Erie. Fought in the Bass Islands to the north of Sandusky, the U.S. won a convincing victory, and thus controlled the lake for the duration.

In the early 19th century Ohio's transportation system of roads and canals began to reach beyond its established river-traffic routes. New York's Erie Canal connected the Great Lakes with the Atlantic Ocean, giving Ohio a road to the marketplaces of the world. In short order new railroads crossed the state, and industrial expansion soon followed.

During America's Civil War (1861-1865), the State of Ohio played a key role in providing troops, military officers, and supplies to the Union army. As nearly 320,000 of its men marched off to war, Ohio was spared the bloody battles witnessed by other states, and yet, 7,000 of its soldiers were killed in action. 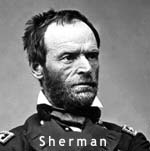 Of both political and military note, several of the war's most influential generals were Ohio natives, including Ulysses S. Grant, William T. Sherman, and Philip H. Sheridan. In addition to Ulysses S, Grant, four (Ohio-born) Civil War officers would later serve as the President of the United States; James A. Garfield, Benjamin Harrison, Rutherford B. Hayes and William McKinley.

And speaking of Presidents, William Henry Harrison, America's 9th President, although born in Virginia - lived in Ohio when elected. In the early 20th century, the state's political influence expanded as Ohioans William Howard Taft, and Warren G. Harding both served as President of the United States.

With manufacturing giants like the United States Steel Corporation, Goodrich Tire and Rubber and Standard Oil based in Ohio, the state's economy was crushed by the Great Depression that began in 1929. Adding insult to injury, labor strikes (especially in the steel industry) further crippled the state.

Like most other U.S. States, World War II also revived the prosperity and pride of Ohio. To support the war effort manufacturing industries opened factories across the state, thousands of jobs became available, and Ohio was once again in a prominent position.

Much of that prosperity ended in the latter part of the 20th century as its northern industrial centers all but closed; the massive steel industry shutdown plant after plant; the worldwide market for coal faded away, and unemployment reached record levels.

Today, resilient Ohio is right back on track; new businesses are opening in record numbers, many small and large manufacturing plants are on a 24/7 work schedule, and its fertile farmlands are some of the most productive in the country.

The State of Ohio - the proud home of eight American Presidents - is often called the "Birthplace of Aviation Pioneers," as NASA astronauts Neil Armstrong (the first man on the moon) and John Glenn were born in Ohio, as well Orville Wright, the co-inventor of the airplane.

Ohio Firsts: Ohio is acclaimed as the birthplace of the first professional baseball team (the Cincinnati Red Stockings) and for a tasty American-classic...the hot dog.

Ohio is known for its colleges and universities, their championship athletic teams, and of course, the Pro Football Hall of Fame. Potential Ohio vacation destinations are numerous, including the Rock and Roll Hall of Fame in Cleveland and the world renowned Cincinnati Zoo.

The State of Ohio is the 7th most populous in the United States with 11.5 million 'Buckeyes' calling this Midwest area home. Ohio is a big state of rolling hills and plains, including the Allegheny Plateau dotted with frequent lakes and rivers. Known as the gateway to the Midwest, the northern Ohio border is at Lake Erie and the southern is along the Ohio River with Kentucky. The states of Indiana and Michigan are to the West, with Pennsylvania and West Virginia bordering the East.

Ohio is an important commerce and shipping hub with 50% of the North American population and 70% of its manufacturing facilities within a one day drive or a cruise on the Great Lakes. Known as a 'Swing State' with no solid political party leaning, Ohio is one of the states that can turn the tide of any election, especially presidential, so U.S. politicians pay special attention to the Buckeye State when its campaign time.

The state has several large metropolitan areas, with the Capital City of Columbus the largest by population. Cleveland, Cincinnati, Toledo, and Akron follow closely behind. Akron is home to the famous Goodyear Tire Company and Toledo is known as the Glass City related to its long history in that industry with Owens Corning, Owens-Illinois, and Libbey Glass calling the city home. 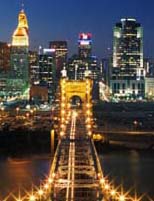 The Ohio River town of Cincinnati is home to the world famous Cincinnati Orchestra, the largest amusement park in the Midwest, Paramount Kings Isle, and the first baseball team in the USA, the Cincinnati Reds (first known as the 'Red Stockings').

The All-American city of Cleveland is famous for its Blues roots, Rock & Roll Hall of Fame and the West Side Market, which has been doing business since the early 1800's. The Economist listed Cleveland, Ohio as the best city for business conferences in the United States, as well as tied with Pittsburgh, Pennsylvania as 'the most livable city in the U.S.'

But.... it's the Buckeye State's small towns, family farms and hard working people that remain the cornerstone of its very bright future.

Great Ohio Vacation Destinations, or a Place to Call Home

In recent decades Ohio has rebounded beautifully from a decline in heavy manufacturing, such as the steel and auto industries, to become a diversified economy with the trade, transportation, and utility sectors the biggest employers of Ohioans. Even though the manufacturing focus has declined in recent times, the state still boasts the 3rd largest manufacturing output of all 50 U.S. States.

The state of Ohio blends a rich metropolitan culture with the solid traditions of the American Heartland and its people. This is a great place to call home and travelers will find that a Ohio Vacation offers plenty of great things to see and do for the entire family.