In the Colorado area, centuries before the white man appeared on the scene, nomadic Indians foraged the plains for edible vegetation and small animals.

In 1540, the Spanish explorer Coronado and a large expedition of men moved north out of Mexico in search of gold. Eventually reaching southeastern Colorado in 1541. Over the next two centuries, French and Spanish exploration of this mountainous area continued.

In 1800, when Napoleon Bonaparte's armies moved across Europe, pressing Spain into a corner, the Territory of Louisiana (New Orleans) and a huge slice of land in the now central United States (including much of Colorado) was ceded to France by Spain via a treaty.

Beginning in the 1820's adventurers, fur trappers and traders of all description flooded the area, trading posts (forts) were established to effectively and safely barter with the Indians. Beaver pelts and buffalo skins were shipped to the eastern markets in huge quantities.

And speaking of Indians, Colorado at that time was the hunting grounds of the Apache, Arapaho, Cheyenne, Comanche, Utes and others. As Indian lands (territories) were stolen, hostilities with the invading white men were inevitable, but the firepower of the U.S. Military forces eventually proved overpowering to the Native Americans.

When gold was discovered in California in 1849, the subsequent get-rich-quick "fever" spread across the west, reaching the Colorado Territory when it was also found (near Denver) in 1858. In the next few years, tens of thousands of people arrived here to search for the golden treasure. As a result dozens of small settlements were built across the territory, and the small town of Denver was itself dedicated in 1860. 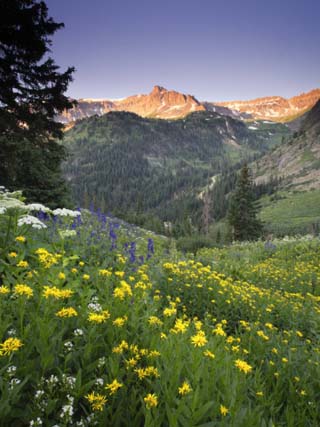 Wildflowers in an alpine meadow...
by Robbie George
Buy This at Allposters.com 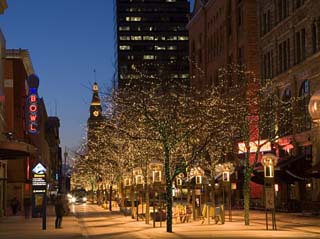 16th Street...
by Chuck Haney
Buy This at Allposters.com