People arriving over the Bering Strait from Mongolia about 13,000 years ago first populated the Pacific Northwest. The native tribes were known for intricately carved totem poles. The world's tallest totem pole – 105 feet high – is located in Tacoma.

Before the arrival of Europeans, it is estimated that there were 125 distinct Northwestern tribes. The sea provided bountiful supplies of food and cedar trees provided material for longhouses, large canoes, and even clothing (made from bark). With such abundance, complex cultures developed.

In 1775 Spanish Captain Don Bruno de Heceta landed on the coastline and claimed all lands up to the Russian possessions in the north for Spain. In 1790 Spain opened the territory to trappers and explorers of other nations, mainly Great Britain and the United States.

British Captain James Cook charted some of the coastline in 1778 while seeking the Northwest Passage. American Captain Robert Gray discovered the mouth of the Columbia River in 1792 and named it after his ship. He subsequently established a trade in sea otter pelts.

U.S. President Thomas Jefferson sent Lewis and Clark overland to seek the Northwest Passage, and although they found the passage did not exist, they laid claim to the territory. Their expedition, along with Captain Gray's explorations, gave the United States a stake in the land.

In 1819 Spain ceded their earlier claim to the United States, although the British disputed it and the area existed for several decades under joint control. President James K. Polk campaigned in 1844 under the slogan "54-40 or Fight, " contending that the northern border of the US territory should be at the southern edge of the Russian territory at latitude 54º40". The dispute was finally settled in 1846 with the Treaty of Oregon, and the northern border was set at the 49th parallel, the modern border between Canada and the United States.

Many of the settlers following the Oregon Trail migrated north and settled in Washington in the Puget Sound area. The first settlement was in 1846. In 1853, part of the Oregon Territory was named the Washington Territory. It became the 42nd state in 1889, with the capital in Olympia, and remains the only state named after a U.S. President.

Because the Cascade Mountains run parallel to the coast the entire length of the state, Washington is divided into two distinct climates. The western third has a temperate rain forest climate, while the eastern two-thirds of the state is warmer and drier.

In addition to its modern high-tech industries, the economy of the western third of the state has been based primarily on lumber (particularly Douglas Fir) and fishing. The Columbia River area has the richest salmon fishing the Northwest. Mineral smelting (gold, silver, copper, and lead) was located in Tacoma. 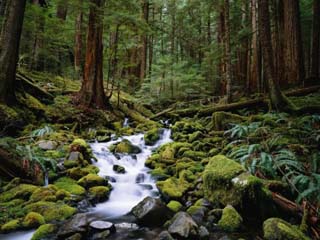 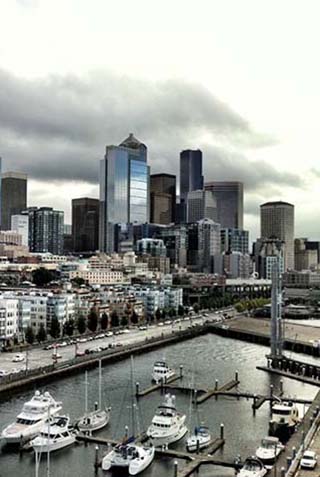