North Dakota is, at times, referred to as a "High Plains" state, with Minnesota to the east, South Dakota to its south, Montana to the west and the Canadian provinces of Saskatchewan and Manitoba to the north.

A stone marker in Rugby identifies itself as being the "Geographic Center of the North American Continent".

First settled by the Native Americans several thousand years ago, it wasn't until the mid-1700's (1738 - 1740) that French Canadians, led by Sieur de la Verendyre, explored the region. The major tribes in the area at that time included the Mandan, Hidatsa, Arikara, Sioux and Chippewa.

La Verendyre visited the Mandan tribes in 1738 and was amazed at their level of development, especially in agricultural prowess and trading.

The U.S. acquired most of North Dakota from France in 1803 with the Louisiana Purchase. Following the purchase, President Thomas Jefferson commissioned the Corps of Discovery and selected Lewis and Clark to lead the expedition.

In North Dakota, led by Sakakawea, a Lemhi Shoshone woman who acted as their interpreter and guide, they explored the territory. Their party built Fort Mandan where they spent the winter of 1804-05. Sakakawea traveled with them during their continued exploration of the western United States.

In a treaty with Great Britain, signed in 1818, the U.S. obtained the northeast section of North Dakota, including the Pembina settlement. Pembina was first a fur-trading post and then became a permanent settlement in 1812.

The Dakota Territory, which included present day North and South Dakota and parts of Wyoming and Montanawas organized in March 1861. The territory remained sparsely settled until the late 19th century when railroads entered the region.

The railroads spurred the economic growth and development due to the ability of transporting agricultural products, such as wheat, flaxseed and cattle. 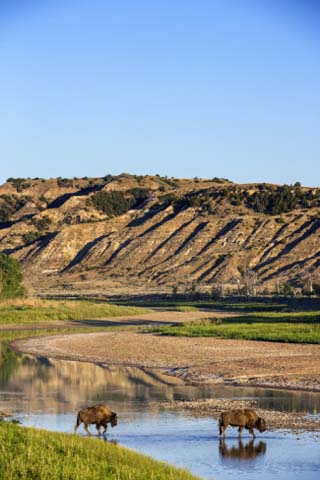 Bison crossing the Little Missouri River...
by Chuck Haney
Buy This at Allposters.com