This beautiful ancestral homeland of the Delaware, Iroquois, Shawanee and Susquehannock Indians changed irrevocably in the early 17th century.

Though originally claimed by the British as a part of the Virginia colony, the Dutch and Swedes established small trading posts along the Delaware River, and both clashed for control. The Swedes built the first permanent settlement in 1638, but both factions were eventually forced out, as the powerful English claimed their territory.

In 1691, England's King Charles II granted a large land tract to the Quaker leader, William Penn. Penn's promise of religious freedom proved a magnet for thousands of settlers, and Philadelphia (because of its geographical position) eventually became the cultural, economic and political center of the thirteen original colonies.

In the beginning stages here, the inability of the new European colonists and indigenous Indians to live side by side, eventually forced the Indians to migrate westward. Most that remained would perish from the brutalities of colonial expansion.

The on-going dispute between the Penn family of Pennsylvania, and the Calvert family of Maryland over the border between the two colonies finally erupted into war in 1730. After years of violent and bloody conflicts, England's King George II negotiated a cease-fire in 1738. Shortly thereafter, the English surveyors, Charles Mason and Jeremiah Dixon, delineated the official border, and this original property dispute decision, the Mason-Dixon Line, would later become a symbolic dividing line between the Northern and Southern states during America's Civil War.

As a part of the British Empire, Pennsylvania (especially in the western territories) was an active participant in the continuing wars between Great Britain and France for dominance in North America. The French and Indian War (1754-1763) was the last, and conclusive battle. The British were victorious, but plunged into war debt. England's king, in a creative way to payoff that debt, decided to raise tax monies from his new colonies, and that decision was the genesis of the American Revolutionary War.

In the mid-1700's, eastern Pennsylvania was bustling with commerce; by water and road agricultural products moved across the colonies. Philadelphia shipped a wide variety of goods to inland farms and towns, and was transformed into a vital center of foreign trade. The arts, educational institutions, and sciences flourished, newspapers and magazines were printed and America's first hospital was built.

By early 1776, Pennsylvania was a powerful force in colonial America. It was then that England's king imposed new taxes on the colonies. Outraged citizens and merchants in Philadelphia, and in all of the colonies began to resist and rebel, and the talk of independence was in the air. Philadelphia was a hotbed of that activity.

Pennsylvania and the Early United States of America

In June of 1776, a committee of the Second Continental Congress consisting of John Adams of Massachusetts, Benjamin Franklin of Pennsylvania, Thomas Jefferson of Virginia, Robert R. Livingston of New York, and Roger Sherman of Connecticut (the "Committee of Five") was formed to draft a declaration of independence from Britain.

America's Revolutionary War was fought on many fronts, and Pennsylvania troops took part in campaigns across the colonies and on into Canada. Pennsylvania farms and factories were essential to the success of the Revolutionary armies.

General George Washington (America's first President) and his bloodied and battle-worn Continental Army wintered at Valley Forge, Pennsylvania. (1777-1778). This tactical decision provided a much-needed rest and retraining period, and after six months in camp his highly-motivated and revitalized army marched out of Valley Forge to defeat the British in battle.

In the end, the relentless bravery and desire of the colonists for freedom at any cost, and with the valued-help of the French alliance (one negotiated by Benjamin Franklin) the British surrendered on October 19, 1781, and a new nation was born. 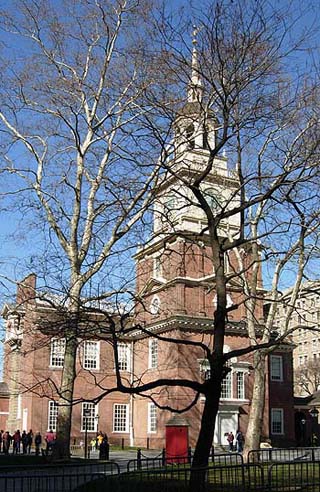 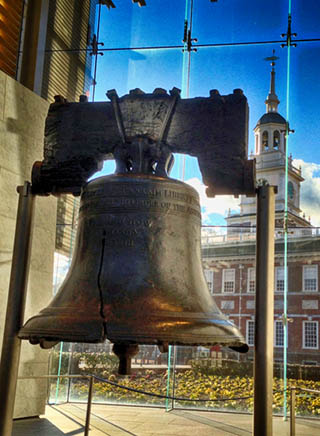 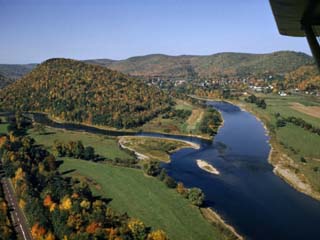 The Delaware River converges at the state border...
by Robert Sisson
Buy This at Allposters.com