An advanced mound-building culture (called the Mississippians) flourished in this area of North America from 800 A.D., up to the mid-15th century. That civilization vanished for unknown reasons. 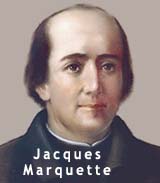 In 1673 French explorers Jacques Marquette and Louis Joliet began their exploration of the Illinois and Mississippi Rivers. Others followed, and for much-needed protection from indigenous Indians, forts were built.

The French claimed all of this new land for their home country, and it became part of a vast slice of land across North America called New France.

It remained a part of the French Empire until the Treaty of Paris of 1763 when it passed to the victorious British in the French and Indian War (1754-1763).

During the American Revolutionary War (1775-1783), an estimated 2000 Native American hunters inhabited the area. In 1778, George Rogers Clark, a military officer from the Virginia Colony, led American forces into Illinois to fight the British and to claim the land.

After the war, in 1783, this entire region was ceded to the United States by the State of Virginia, and it became part of the Northwest Territory; land that would be settled, and eventually divided into individual states within the United States.

From the previously established Indiana Territory, the Illinois Territory was created on March 1, 1809, by an Act of U.S. Congress. By 1810, settlers poured into the area, many arriving via river barges that traveled down the Ohio River. Subsequently, the southern part of the state developed first.

Illinois became the 21st U.S. State in 1818 with its capital in Kaskaskia. In 1819 the capital was moved to Vandalia, and later to Springfield.

The Black Hawk War of 1832 resulted in all of the remaining native American tribes being driven west of the Mississippi River. The expansion of railroads in the 19th century facilitated the arrival of a large number of immigrant farmers from Sweden and Germany.

Abraham Lincoln, The Most Famous Native From The State Of Illinois

In 1830, Abraham Lincoln's family moved from Indiana to Illinois. This most famous Illinois Native began his political career at age 23. As a lawyer, he served four successive terms in the Illinois House of Representatives, and was a powerful force in forming the Republican Party.

On November 6, 1860, Lincoln was elected the 16th President of the United States. Shortly thereafter (in 1861) America's Civil War began. The nearly 2 million inhabitants of Illinois supported "their President" and the Union effort by forming 150 infantry regiments that collectively sent over 250,000 troops off to war.

On January 1, 1863, President Lincoln issued his Emancipation Proclamation, one that declared (forever free) those slaves within the Confederate States of the South. The proclamation was widely-praised after Lincoln's death, and the anniversary of its issue was celebrated as a black holiday for more than 50 years.

Lincoln won re-election in 1864, as the Union military finally prevailed. While addressing those assembled during his Second Inaugural Address, he stated... "With malice toward none; with charity for all; with firmness in the right, as God gives us to see the right, let us strive on to finish the work we are in; to bind up the nation's wounds.. "

Widely viewed as America's greatest President, Abraham Lincoln was assassinated on Good Friday, April 14, 1865, at Ford's Theatre in Washington, D.C. by John Wilkes Booth. The battered nation mourned the loss of this brave and insightful man for many years. The capital of Illinois, Springfield, is home to Abraham Lincoln's tomb.

There was a rapid increase in industrial development in Illinois after the Civil War. Railroads were a major catalyst, as they brought immigrants by the thousands to work in the quickly expanding factories in Chicago, and other northern cities.

Chicago, the largest city in Illinois by 1857, led the nation in grain and meatpacking production. Then, in 1871, this city's flimsy wooden structures were almost totally destroyed by the Great Chicago Fire; burning for almost two days, it killed over 300 people. Chicago was quickly rebuilt, and by 1875 there was little evidence of the disaster remaining.

By the early 1900's, factories continued to expand in the northern cities, and coal mines in the central and southern parts of Illinois attracted large numbers of immigrants from eastern and southern Europe.

In the early 20th century laws were passed in America banning the manufacturing and selling of alcohol. During the years of Prohibition (1920-1933) in the Chicago area, the infamous gangster Al Capone, his mob and other gangs, sold illegal liquor; bringing unwanted notoriety and violence to Chicago.

When the Great Depression of the 1930's reared its ugly head, it proved financially disastrous across Illinois, and all of America. Industry all but shut down and thousands or workers lost their jobs. The discovery of oil in the southern-reaches of the state provided some of the needed economic recovery in the late 1930s.

In the end it was World War II that revived the state's 20th century economy. Unparalleled growth in munition and other defense-related industries, as well as demand for traditional products sparked the economy.

Although considered one of America's top industrial states, Illinois is also an important agricultural state, successfully producing corn and soybeans in record amounts. In addition, the state is a leader in the cattle and hog industries. With a 2000 census population of over 12 million, Illinois ranks 5th in population in the nation. Over 65% of the state's population resides in the Chicago area, the third largest city in the U.S.

Renowned for its natural beauty, the Illinois landscape has something to offer every outdoor lover. Visitors can drive any of the six National Scenic Byways and witness beautiful rivers, lakes, prairie and acres of idyll farmland, or visit the many state parks and wildlife centers. Lake Michigan forms the Illinois Northwestern border and the Mississippi River separates the state from Missouri and Iowa.

Several airlines and Amtrak use the state as a major transportation pivot and the city of Chicago is an important port of call on Lake Michigan. The central location and transportation infrastructure are attractive for all kinds of major industrial complexes, leading to a highly diverse economy. The Chicago metropolitan area is home to many of the nations' largest companies including Boeing, McDonald's and Motorola.

For those of us that love travel, the State of Illinois offers a broad array of choices. From quiet and relaxed small towns where "do not disturb" and "table for two" are the only plans for the day, or to the sparkling non-stop city of Chicago, where a "24-hour day" seems totally inadequate.

In this modern "Land of Lincoln" you will discover "Mile after Magnificent Mile" of historical points-of-interest, professional sports, shopping venues, state parks, summer and winter outdoor activities, and a growing wine industry.

Illinois boasts world-class museums including the state of the art Abraham Lincoln Presidential Library and Museum in Springfield, the largest presidential library in the country. The city of Chicago is the birthplace of skyscrapers and a distinctive brand of the blues, as well as Illinois vacation attractions such as the renowned Lincoln Park Zoo and Art Institute of Chicago.