When the first Europeans arrived along the unexplored coastal areas of the Carolinas (north and south) in the early 16th century, the only inhabitants were Native Americans. In what is now called North Carolina, they included the Algonquian, Iroquoian. Siouan, and Tuscarora tribes, and by mid-century, several Spanish explorers had ventured further inland, but no settlements were established.

In the 1580's, Roanoke Island along the Outer Banks of North Carolina was the site of the first European colony in America, but it was quickly abandoned. Other settlements were tried, but they also failed. Then, in 1587, a large expedition organized by Sir Walter Raleigh brought 150 settlers to this new world, and they also established their colony on Roanoke Island.

In time living conditions proved most difficult and with their supplies all but depleted, the colony's appointed leader, John White, and others were forced to return to England for much needed help. It took White more than two years to return, and once back on the island, all that remained of his colony was the word "CROATAN" carved on a nearby tree. All men, women and children were gone without a trace, and the fate of that "Lost Colony," has never been determined.

Undaunted, the parade of settlers into the area continued. By 1670, after a land charter granted by England's King Charles II, the overall territory (north to south) was named Carolina after King Charles, and it would later be divided into the British provinces of South Carolina and North Carolina.

By the early 18th century European settlements stretched from the Abermarle Sound, south to what is now Charleston, South Carolina. Native Americans were being squeezed off of their long-held lands, and they soon fought back; the hundreds killed settlers and their churches and homes burnt to the ground. Indian uprisings continued for many additional years, but their understandable efforts proved futile. 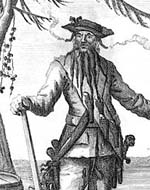 To make matters worse for the new residents, pirates struck coastal settlements with impunity, facing little organized resistance. Finally, in 1718, Blackbeard the Pirate was killed, and for all practical purposes pirate attacks in the Carolina's were over.

Even before separated into individual British provinces, North and South Carolina were quite different. On the large cotton plantations in South Carolina, black slaves outnumbered the white settlers, while in North Carolina, tobacco was king, but the predominate Quaker population was vigorously opposed to slavery, and subsequently black slave numbers remained low.

The British saw an opportunity to tax the newfound wealth of their colonies, including the Carolinas. Especially offended by taxation without representation, influential tobacco farmers and merchants rebelled to that tax, and in 1776, North Carolina voted for independence from Great Britain.

Similar to some other southern colonies, citizens of North Carolina were on two sides during America's Revolutionary War; Tories remained loyal to Britain while others (Whigs) passionately supported the war for freedom. Unlike South Carolina, North Carolina witnessed little fighting, but hundreds of its men fought and died on both sides in Georgia, South Carolina and Virginia.

At war's end North Carolina was free from Great Britain's financial repression, and after some hesitation in accepting all of the terms of the new U.S. Constitution, it finally agreed, and on November 21, 1789, became the twelfth state to enter the new union. In 1794, Raleigh was declared the capital.

It took years for the land to reach its full potential, but by the mid-1830s, its agricultural and manufacturing industries began to prosper, anchored by tobacco. As the state's economy and influence continued to grow, two North Carolina favorite sons were elected President of the United States; Andrew Jackson (1829-1837), and James K. Polk, (1845-1849).

Riches gained from the endless toil of black slaves in the southern states was certainly a controversial front-burner issue between North and South. Though North Carolina had few slaves when compared to others, it followed South Carolina, seceded from the union on May 20, 1861, and joined the Confederacy. America's Civil War soon followed, a war that would eventually all but destroy the southern states.

Significant battles occurred in North Carolina, and it reportedly supplied more men and more materials to the Confederate cause than any other state. In the end this once peaceful and prosperous place was in ruins, and in the end, it sadly suffered more dead than any other southern state.

During the lengthy reconstruction period southern states were all placed under military control. After North Carolina approved a new constitution outlawing slavery, it was readmitted to the Union on June 25, 1868. 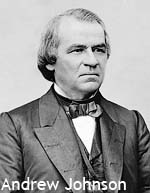 Following the tragic assassination of President Abraham Lincoln, Andrew Johnson from North Carolina assumed that high office and served as America's 17th President (1865-1869). During his term he helped bring hydro-electric power to the state, and the resurgence of its tobacco industry.

North Carolina was the site of one of man's most important events, as the modern aviation industry was born here when the Wright Brother's (Orville and Wilbur) made the first successful powered flight (by man) at Kill Devil Hill near Kitty Hawk in 1903.

By the mid-1920's tobacco production, furniture manufacturing and textile industries propelled the local economy into a nation-leading position in many areas. Then, in 1929, America's stock market crashed, the Great Depression took a strong hold, and North Carolina and all southern states would suffer once again.

Festering racial tensions peaked here in 1960 when black students in Greensboro refused to leave a Whites-only lunch counter. Their efforts and the on-going Civil Rights movement across the south forced the Civil Rights Act of 1964, as the U.S. Government banned the segregation of public places and schools. In the 1970's, schools across North Carolina were finally integrated.

North Carolina is also home to some of the most stunning scenery in America, including the Cape Hatteras National Seashore, and the nation's busiest national park, the Great Smoky Mountains National Park.

North Carolina's geography and topography provides residents and visitors an unparalleled selection of recreational activities, including some of the best freshwater and saltwater fishing venues anywhere. In addition there's a wide variety of biking, boating, camping, hiking, sailing and skiing opportunities, and when you add historic sites, lighthouses, professional sports, theme parks, and much, much more to that mix, well, the beautiful State of North Carolina is certainly worth a postcard, or two.

Countries With The Highest Rates Of Diabetes

Countries With The Most Protected Lands (Percentage Of Area As Reserves)