Long before European explorers arrived here, this land was the ancestral home of Native American Indian tribe; they raised their children and crops; hunted the bountiful land, and for the most part, lived in peace. 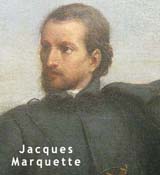 In 1673, the intrepid French explorers, Father Jacques Marquette and Louis Joliet, made their way down the Mississippi River to a point near present-day St. Louis. Ten years later, after traveling down that same river, René-Robert Cavelier claimed all the land drained by the Mississippi for France; he named it the "Louisiana Territory" in honor of his King, Louis XIV.

Shortly thereafter protective forts, small fur-trading posts and settlements sprang up along the Missouri and Mississippi Rivers; immigrants by the thousands arrived in this "Land of Opportunity" via river barges, and soon black slaves from the deep-south were brought in to work in the mining industry. In 1750, Missouri's first permanent settlement, Ste. Genevieve, was built.

For 50 years control of this land alternated between the Spanish and French, and then, in 1800, when the armies of French ruler Napoleon Bonaparte moved across Europe, pressuring the Spanish Crown into submission, the entire "Louisiana Territory" was returned to France.

In 1803 Napoleon surprisingly sold the entire area to the United States in a transaction named the Louisiana Purchase. The United States doubled in size almost overnight and many new territories were established.

In the new Missouri Territory, settlers from the east arrived in great numbers; they built homesteads and farmed the lands much to the dismay of the already pressured Indians. In a justifiable response the Indians attacked the white men and their uprisings continued until a peace treaty was finally signed in 1815.

Slavery was certainly the crisis at the heart of America's Civil War, and in Missouri opposing slavery factions firmly staked their ground; troops were sent to support both the Confederate and Union causes, and eventually neighbors fought neighbors as the tragic war raged on. In the end Missouri witnessed more battles than any other state, next to Tennessee and Virginia.

The Civil War ended in 1865 and slavery was abolished in Missouri. Regardless, the spoils of war were devastating as steamboats (the lifelines of commerce growth) in mid-America were destroyed by the hundreds in the war. River traffic never recovered as railroads proved more efficient and economical.

In fact, railroads were the demise of many river towns, but eventually Kansas City and St. Louis became important railroad centers. Economic recovery was slow but steady in Missouri, and even though America's Great Depression proved disastrous for many, World Wars I and II helped to revive (and motivate) its 20th century economy; new industries developed as the state provided war materials for both conflicts.

The Show Me State is surrounded by eight distinct neighbor states: Iowa, Illinois, Kentucky, Tennessee, Arkansas, Oklahoma, Kansas and Nebraska. It doesn't come as a surprise that Missourians consider themselves at once Midwestern and Southern. This versatility is also felt in the state's natural landscape, from the soft hills of the Northern plains to the majestic Ozark Mountains in the South and the countless rivers and lakes sprinkled in between. Missouri is home to over 6000 recorded caves, second only to the state of Tennessee.

A mix of urban and rural culture, Missouri has a sound economy to back it up, ranging from aerospace, transportation equipment and food processing to agriculture products. Missouri cities and suburbs are thriving and families are moving here for the great quality of life and work opportunities. A major transportation center, with two of the nation's three busiest rail centers and two crucial airport cores, Lambert-St. Louis International Airport and Kansas City International Airport, Missouri is well connected with the rest of the country.

St. Louis lies on the banks of the Mississippi River and boasts over 105 parks and host of free major Missouri vacation attractions. Visit the soaring Gateway Arch, St. Louis Zoo, and the Central West End neighborhood. Join the club scene for a night of soulful American Blues. Kansas City on the Missouri River is famous for its beautiful fountains and some of the best barbecue in the land. Both of these cities offer science museums, amusement parks, and an unending supply of family vacation highlights. Springfield boasts the picturesque Ozark Mountains just southeast of the city and the capital of Jefferson City nestles in the center of the state.

As the gateway to America's west, modern Missouri is famed for historic river towns (large and small), the Gateway Arch in St. Louis, Lake of the Ozarks recreational area and so much more. Missouri continues to grow, the economy remains strong, and its famous nickname, "The Show Me State" in many ways symbolizes Missourians as the dedicated, determined people that they've proved themselves to be.

Countries With The Most Land Reclaimed From Seas & Wetlands

The Largest Casinos In The World