Designed in 1791 by the French architect Major Pierre-Charles L'Enfant, Washington was the world's first planned capital. 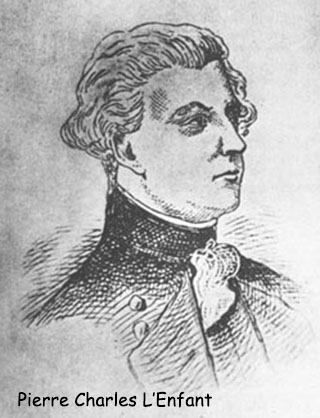 Washington, D.C. is not a state, but rather the combination of the District of Columbia, and Washington - the capital city of the United States of America. In essence, they are one in the same, and they coexist.

Established by congressional acts and personally selected by George Washington, the District of Columbia, commonly referred to as "the District" (shown in white), is the seat of the U.S. federal government. Within its borders sits the massive Capital Building, the White House and literally hundreds of federal buildings, monuments and office complexes.

Originally a 10 mile square, with Maryland and Virginia granting land on each side of the river to the federal government, its shape has changed slightly over the years, as Virginia's lands were returned in 1846.

Integral parts of "the District," namely Arlington Cemetery, the Pentagon and Ronald Reagan Airport are located across the Potomac River in the Virginia county of Arlington, and they, along with others, remain part of the sprawling District of Columbia's metropolitan area.

From its celebrated history and symbols of patriotism, to its many public and private attractions and buildings, the Washington, D.C. area is one of America's most visited sites.

The New 7 Wonders Of The World