The Spanish arrived here in 1540, disrupting the quiet lifestyle of the Native American Indians. In only a few short years forts and missions were built along the coastal islands; all subsequently becoming easy targets for pirates that terrorized the area.

In the late 17th century the English and Spanish fought for control. The English (and their Indian allies) finally gaining the upper-hand, and by the 1720's there was talk (in England) of a new British colony, one to be named Georgia in honor of the king.

In 1732, England's King George II granted that charter, and this new colony would become the last of the original thirteen colonies established in America.

Led by General James Oglethorpe, the first colonists arrived in Georgia and founded Savannah in 1773. Just three years later Georgia and the other colonies rebelled against British rule. They signed the Declaration of Independence, and from north to south, revolutionary war swept across this upstart land.

English troops marched south and captured Savannah, and in short order they controlled most of Georgia. However, when General Cornwallis surrendered his British troops in 1781, the bloody land war for independence was over and Georgia would become the fourth state to ratify America's new Constitution.

With its resources and geographic position, Georgia quickly developed into a regional center of commerce. The population expanded and Indian controlled lands were all but gone by the 1820's.

Eli Whitney's cotton gin invention propelled cotton production into one of Georgia's most significant industries. Riches gained from the endless toil of black slaves in cotton farming was a hot-button issue between North and South, and that thorny debate and other slave problems sparked a tragic civil war.

Abraham Lincoln became President of the United States in 1861, and shortly thereafter Georgia and other southern states withdrew from the Union and joined the Confederacy. America's Civil War played-out across the south; at war's end Georgia was devastated and Savannah was in ruins and Atlanta burned right to the ground. 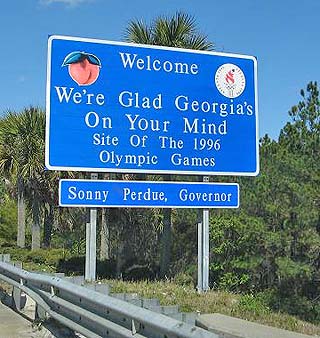 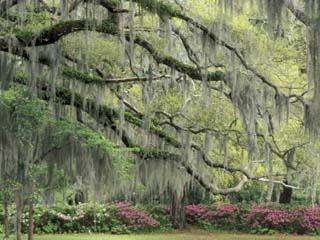 Live Oak Tree...
by Adam Jones
Buy This at Allposters.com