) flourished in this area of 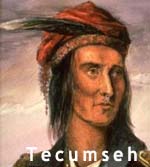 As a result of the mid-17th century French and Iroquois Wars in New France, a large slice of North America, many indigenous Indian tribes were forced further west into the central Great Lakes area just to survive. The Miami and Pottawatomie came first, followed by the Delaware and Shawnee nations.

In 1679, the French explorer Robert de La Salle traveled through the Ohio River Valley area; he claimed the lands for France; French fur traders soon ventured in and isolated trading posts were established.

Needing protection from the indigenous Indians, the French built forts in the 1720's at Fort Wayne and Lafayette. Along the Wabash River in southwestern Indiana, Vincennes (a trading post) became the first permanent settlement around 1732.

As the French expanded their control in the region, Jesuit (Catholic) priests soon followed. Their mission was to convert the Native Americans to Christianity, and although that task proved difficult, their attempts proved rather fruitful for the French as Indians became their valuable allies against a widening British influence.

This land first claimed by France and now coveted by Britain was soon embroiled in the French and Indian War (1754-1763), as both European powers fought for total control of North America. In the end, the British dealt crushing blows to the French and their Indian allies, and they now controlled all lands east of the Mississippi.

During the American Revolutionary War (1775-1783), George Rogers Clark, an accomplished military officer from the Virginia Colony, led American forces into Indiana to fight the British and to claim this land for America. After the war, the Indiana area became part of America's expansive Northwest Territory in 1787.

In 1800, the Indiana Territory, or Land of Indians," was formed by an act of the U.S. Congress. It included lands that would later become the U.S. State of Indiana, as well as Illinois, Michigan, Minnesota and Wisconsin.

It was the first new territory formed from lands of the Northwest Territory; its first governor, William Henry Harrison, would later become the 9th President of the United States of America.

As more settlers arrived into the southern-reaches of the territory, the indigenous Indians were determined to make a final stand. Tecumseh, a Shawnee leader and warrior, rallied the Native American tribes to fight. After many agonizing defeats, including the 1811 pivotal Battle of Tippecanoe, the Indians were all but crushed.

At the conclusion of the War of 1812, the remaining British forces in America and a somewhat small Indian confederation led by Chief Tecumseh were firmly defeated; settlers were now free to move in, as the United States had firm control of the Indiana Territory.Talk of statehood was in the air, and on April 19, 1816, the passing of the "Enabling Act" allowed inhabitants of the Indiana Territory to form a state, subject to the final approval of the U.S. Congress. Subsequently, a constitution was drafted, borders were determined, and on Dec. 11, 1816, Indiana became the 19th state to join the union of the United States, with its first capital in Corydon

Early statehood was a financial struggle in Indiana, however cities along the Ohio River blossomed rather quickly as they provided easy access to the Mississippi River and the port city of New Orleans. To help with growth, the state received financial grants from the federal government to build new roads and canals.

By the 1850's, productive farms covered the rural areas, milling industries in the south were booming, new cities were springing up and the population was now approaching one million residents.

During America's Civil War (1861-1865), the slave-free State of Indiana remained a member of the Union, and over 200,000 of its men marched off to war. Though the state saw little action, Indiana regiments participated in all major battles of the war, and nearly 25,000 of its bravest were killed in action.

After the war, Ohio River ports suffered as the federal government put a rigid embargo in place, one that prevented goods from the north being shipped to the south. As a result, southern Indiana cratered, as much of the state's population and industries moved north toward the Great Lakes.

Co-founded by Carl Graham Fisher of Indiana (an automotive parts and highway entrepreneur) the Indianapolis Motor Speedway complex was built in Indianapolis in 1909. Subsequently the city rivaled Detroit in auto manufacturing for a few decades, and the Indy 500 became the most famous and financially successful race in all of motorsports.

The tragic events of World War I (1914-1918) were an economic boost for Indiana businesses, as they produced profitable supplies for the war effort; automobile, iron and steel production led the way.

The growth in Indiana's industrial base ended almost overnight during the Great Depression (1929-1939); banks closed; transportation companies went bankrupt, and the residual effects lasted for years.

World War II (1939-1945) was the catalyst for a much-needed comeback as Indiana participated aggressively in the war effort; airplanes, munitions and steel manufacturing provided thousands of new jobs, and a much needed tax base. Later in the century high-tech and service industries rose to prominence, and Indiana tourism opened the eyes of travelers.

Modern Indiana is renowned for many things including the Indy 500, the Universities of Indiana, Notre Dame and Purdue, and for being (arguably) the epicenter of high school and college basketball. But perhaps its most endearing charms are found in the small towns that dot the welcoming landscape of the Hoosier State.

Note: Indiana writer Meredith Nicholson, when asked about the origin of the word "Hoosier," quipped: "The origin of the term 'Hoosier' is not known with certainty. But certain it is that ... Hoosiers bear their nickname proudly."

All about the Tobacco Industry