The original inhabitants of Massachusetts (Algonquian Indians) would eventually perish from diseases brought to this land by European explorers in the late 16th century, and from the brutalities of colonial expansion across their ancestral homelands.

In 1620, a religious group from England known as the Pilgrims arrived on the Mayflower, landing near Provincetown. They soon relocated across Cape Cod Bay, naming their settlement Plymouth, and the story of a new nation was born.

This group of breakaways from the Church of England were determined to succeed, and in the fall of 1621, along with their new American Indian friends - celebrated the first American Thanksgiving. Only half of the Plymouth Colony survived their first year in this harsh new land.

Other European groups seeking individual religious freedoms crossed the Atlantic Ocean, including the Quakers and Puritans. The Puritans founded the much-larger Massachusetts Bay Colony, with Boston at its heart.

Within this mix of competing beliefs and cultures, racial and social prejudices soon surfaced and for almost 50 years bitter tensions between rival religious groups continued. Controversial witch trials were held and some people were prosecuted and hanged. And worse, wars with the indigenous Indians raged until most were annihilated.

In 1692 the Royal Colony of Massachusetts Bay was formed and a semblance of order was restored. Administered by a royal governor, this collaboration of small towns and religious factions, also included the Massachusetts Bay Colony, Plymouth Colony, Martha's Vineyard, Nantucket, the Province of Maine and what is now Nova Scotia.

A new found prosperity soon swept across Massachusetts, businesses opened, settlements sprang up almost overnight, and sailing ships carried tons of local products to port cities in Africa, Europe and the Caribbean. The economy was booming and the British, seeing a financial opportunity, imposed unpopular taxes on its growing colony. A costly and fatal error in judgement.

The winds of change echoed across the American colonies in the early 1770s, and Massachusetts became a leader in resisting British oppression. John Adams, Samuel Adams and John Hancock were the leaders of the revolutionary activity, and their loud cry's for independence from England were both assertive and bold.

The American Revolution, or American War of Independence (in essence) began in Massachusetts. The Boston Massacre, Boston Tea Party, and the battles of Bunker Hill, Concord and Lexington are etched into the history books of that great struggle.

On July 4, 1776, the Declaration of Independence was proudly signed in Philadelphia. The first to sign that document was Massachusetts resident and President of the Continental Congress, John Hancock.

Throughout the bloody Revolutionary War, the British utilized their naval superiority to capture and occupy coastal cities, but control of the rural areas (where most of the population lived) proved daunting, and difficult.

After a series of inspiring American victories, France signed treaties with America in 1778, and declared war on Britain, its longtime enemy. The French naval involvement proved decisive, as the British army finally surrendered at Yorktown in 1781. 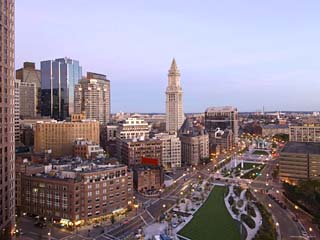 An overview of Atlantic Avenue...
by John Coletti
Buy This at Allposters.com 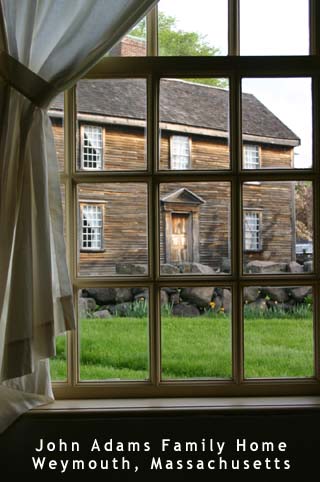