RELATIVE LOCATION:
Alaska is positioned in both the eastern, northern and western hemispheres.

Dissected by the Arctic Circle, it's located in the far northwestern corner of North America, bordering the Canadian province of British Columbia and Canada's Yukon Territory.

It's ringed by the Arctic Ocean, Pacific Ocean, and assorted bays, gulfs, seas and sounds. 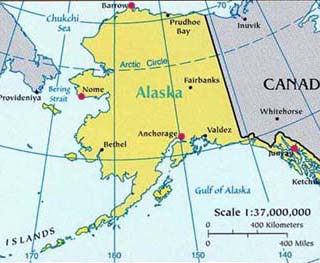