The Colorado Plateau, a series of flat lands, gorges, mountains and valleys, slices across the state's northwestern corner.

The tree-covered Rocky Mountains extend south into New Mexico; significant ranges include the Jemez, Sangre de Cristo, and Zuni. Along the southern reaches of New Mexico, the Black Range, and the rugged Guadeloupe, Mongollon, Sacramento and San Andres Mountains dominate the landscape.

The state's most dramatic feature, the White Sands National Monument is one of the world's great natural wonders.

Additional points-of interest include Carlsbad Caverns, the site of more than 100 caves, including Lechuguilla Cave - America's deepest at over 1,500 feet.

The Rio Grande, rising in southwestern Colorado, flows south through New Mexico, later forming the natural border between Mexico and Texas. Other rivers of size include the Canadian, Gila and Pecos.

For a detailed look at the topography of New Mexico, view this topographic map. 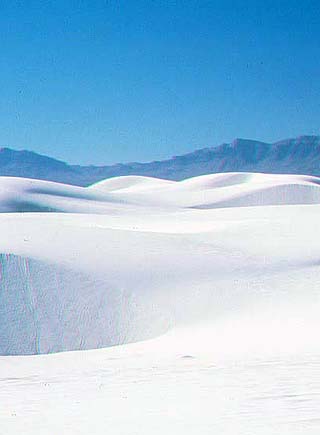