At 27,000 sq km (10,502 sq mi) Great Slave Lake is the second-largest lake in Canada's Northwest Territories; Only Great Bear Lake is somewhat larger. It's also the deepest lake in North America at 614 m (2,010 ft) and the planet's ninth largest.

Positioned entirely within Canada's Northwest Territories, the lake is drained by the Mackenzie River.

Great Slave Lake is mostly frozen late-fall through early-summer, and in winter the ice is often thick enough for semi-trailer trucks to cross it.

Yellowknife, the capital city of the Northwest Territories (population 18,700), sits on the lake's north shore. 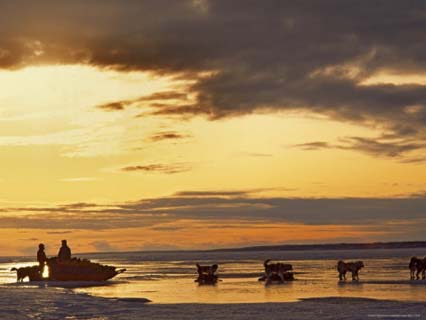 A sled team mushes across the frozen Great Slave Lake...
by Gordon Wiltsie
Buy This at Allposters.com