The Cumberland (or Appalachian) Plateau dominates the eastern third of Kentucky. It's a heavily forested area of hills and mountains, and contains the state's highest point, Black Mt., at 4,139 ft.

The Bluegrass Region (north-central) is a series of rolling hills and meadows. It gets its colorful name from bluegrass, the common name for lawn and pasture grass in parts of the eastern United States.

Northwestern Kentucky is hilly land bordered by the Ohio River. It's often referred to as the Western Coal Field because of the large coal deposits in the area.

The southwestern corner of the state includes the swampy lowlands of the Mississippi River flood plain, and the lowest elevations in the state. This area, purchased from the Chickasaw Indians in 1818, is called the Jackson Purchase, and named for Andrew Jackson.

The Mammoth Cave area (central), is the world's longest cave system, with 365 miles explored to date.

The"Land Between the Lakes" recreational area, bordered by Lake Barkley and Kentucky Lake, is a hilly, forested area of some 170,000 acres.

The state's waterways are dominated by the massive Ohio River, forming its entire northern border, and by the Cumberland and Tennessee River systems, and their many spin-off lakes.

Other rivers of note include the Green, Licking, Kentucky and the Mississippi.

The Kentucky Bend. covers a land area of 17.5 sq miles. It was created due to the shift in course of the Mississippi River (it flowed backward) after the New Madrid Earthquakes in 1811 and 1812. 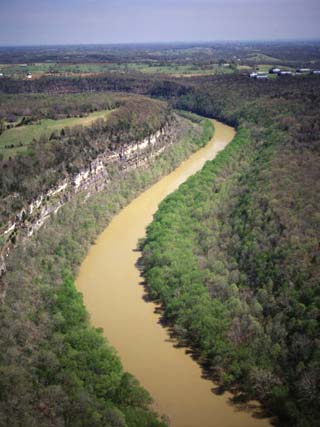 Aerial view of the Kentucky River...
by Adam Jones
Buy This at Allposters.com