Divided into two separate land areas, and bordered by four of the five Great Lakes, Michigan has the longest shoreline in the continental U.S. - nearly 3,300 miles.

Michigan's Upper Peninsula is hilly and rugged in the west, especially in the heavily-forested Porcupine Mountains. Further east in the Huron Mountains the state's highest point, Mt. Arvon, stands at 1,979 ft. Moving to the east, the Upper Peninsula's land is much flatter, with some inland swamps.

Michigan's Lower Peninsula is rather flat, especially along the eastern and southeastern shorelines. Gentle, rolling hills are found central and south, while further north, to the east and southeast of Traverse City, the landscape becomes quite hilly.

Mackinac Island is positioned on the eastern edge of the Straits of Mackinac. Forested Isle Royale, located in the far-northwestern corner of Lake Superior, is the only (island) National Park in the United States.

The surrounding Great Lakes are Michigan's most striking landforms. In addition, the state is covered by over 11,000 fresh water lakes (mostly small).

Other rivers of note include the Ford, Escanaba and Menominee in the Upper Peninsula, and the Au Sable, Grand, Kalamazoo, Manistee, and Muskegan in the Lower Peninsula.

A close look at Michigan's topography on this topographic map! 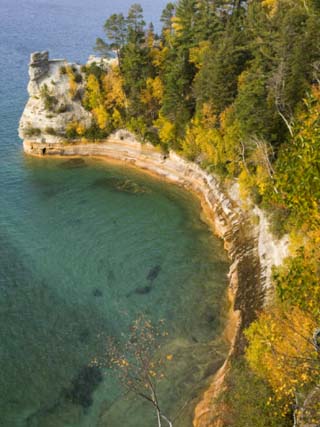 Overlooking Lake Superior...
by Walter Bibikow
Buy This at Allposters.com