The topography of Arkansas varies rather dramatically from northwest to southeast.

The Ozark Plateau stretches across parts of Illinois, Missouri and Oklahoma, and on into Arkansas. This area of low mountains, hills and deep valleys is heavily forested and etched by many small rivers and streams.

South of the Ozarks, the Arkansas River and its namesake valley cut a dramatic path across the state. This valley gives way to the Ouachita Mountains, where Magazine Mountain, the state's highest point is located.

Hot springs are found within the eastern ridges and valleys of the Ouachita Mountains, including the aptly named and world-famous Hot Springs area. In the far north, Mammoth Spring, Arkansas's largest spring and a National Natural Landmark, flows nine million gallons of water hourly that forms a scenic 10-acre lake.

On the fringes of the Ozarks and Ouachitas, the lowland forests and prairies give way to the almost flat landscape of the Mississippi Delta Region that covers the eastern and far-southern areas of the state.

Arkansas' most important river is the Mississippi; it rises in northwestern Minnesota, then flows south to the Gulf of Mexico, just below the city of New Orleans. It is a significant transportation artery and when combined with its major tributaries (the Missouri and Ohio rivers) it becomes the third largest river system in the world at (2,339 miles) (3,765 km) in length.

Other rivers of note include the Arkansas, Black. Ouachita, Red, St. Francis and White. Significant lakes include Beaver, Bull Shoals, Millwood and Ouachita.

For a detailed look at the topography of Arkansas, view this topographic map. 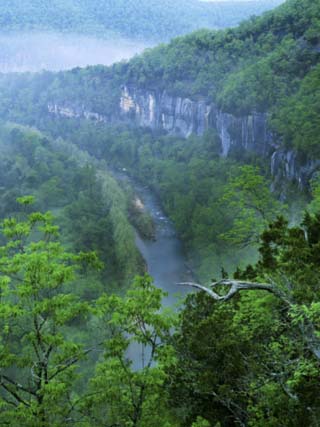 Buffalo National River...
by Charles Gurche
Buy This at Allposters.com