Nevada is the most mountainous U.S. State, with over 150 (named) individual mountain ranges; major ones include the Battle, Monitor, Ruby, Santa Rosa, Schell Creek, Sierra Nevada, Snake and Toiyabe.

The Great Basin - a series of depressions, flats, dry lakes, marshy salt pans and sinks, all scattered between ribbons of mountain ranges - stretches across much of the state. Low mountain desert areas (formerly prehistoric lakes) are situated northeast of Carson City.

Lake Mead, now a major recreation area, was formed by the building of Hoover Dam on the Colorado River. Lake Tahoe (shared with California) and the turquoise-colored Pyramid Lake (photo lower right) are the largest bodies of water.

The Colorado and Humboldt are the most significant rivers. Numerous smaller rivers flow from the mountains, but are often seasonal in nature, and quickly fade in the hot summer sun.

For a detailed look at the topography of Nevada, view this topographic map. 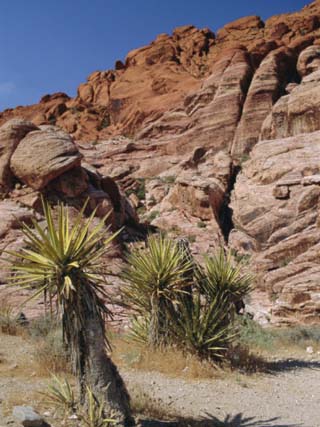 Red Rock Canyon...
by Fraser Hall
Buy This at Allposters.com