Barrier Islands front most of the Coastal Plain, a broad area of lowlands, swamps, and miles of white-sand beaches running almost the complete length of the state. From there, the land rises into a few scattered rolling hills southwest and central.

The Pine Barrens, also known as the Pinelands, is a protected area of forests, swamps and marshes; it contains a huge reservoir (trillions of gallons) of some of the purest water on the planet.

In the far northwest corner, the forested Kittatinny Range - a part the Appalachian Mountains - stretch across the state. There stands the state's highest point, aptly named High Point, at 1,803 ft.

Over many centuries the Delaware River sliced through the Kittatinny Range, forming a wide, deep water gap, or break, named the Delaware Water Gap.

Those mountains then slope southeast into the rolling hills of the Piedmont Plateau, a broad area of small lakes, rivers, streams and narrow valleys.

The Highland's main feature is a series of flat-topped ridges of rock and slate that extend across the border into Pennsylvania and New York. It's also the site of numerous small lakes, rivers and streams.

The most significant rivers in New Jersey are the Delaware and Hudson. The Delaware forms the state's entire western border with Pennsylvania, and most of its border with Delaware. The Hudson is the natural border between northeastern New Jersey and New York.

Delaware Bay is a large estuary outlet of the Delaware River. It's an estimated 782 sq. miles in area, and its water mixes for many miles with the waters of the Atlantic Ocean.

For a closer look at the topography of New Jersey, view this topographic map. 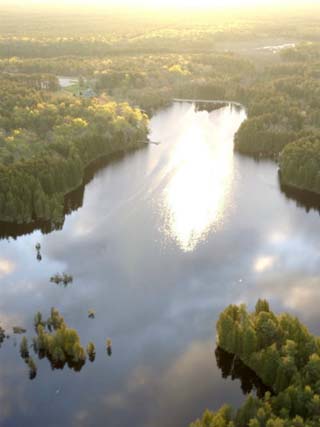 Pine Barrens...
by Dennis Mcdonald
Buy This at Allposters.com