The heart of Mississippi sits between two lowland plains; the Mississippi Plain (or Delta) in the west, and the Gulf Coastal Plain in the east.

In general terms central Mississippi is hilly, as the land gently rises from the Gulf of Mexico coastline to the far northeastern highlands where the state's highest point, Woodall Mountain, stands at 806 ft (246 m).

The Gulf of Mexico coastal wetlands stretch from Texas into Louisiana, then on through Mississippi, Alabama and northwestern Florida. It's an area of bays, bogs, estuaries, marshes and swamps.

Mississippi's most important river is the Mississippi; it rises in northwestern Minnesota, then flows south to the Gulf of Mexico, just below the city of New Orleans. It is a significant transportation artery and when combined with its major tributaries (the Missouri and Ohio rivers) it becomes the third largest river system in the world at (2,339 miles) (3,765 km) in length.

The state's longest indigenous river, the Pearl flows about 450 twisted-miles south from the eastern center of the state to the Gulf of Mexico. Other significant rivers include the Big Black and Yazoo.

The state's largest lakes are all manmade, and they include Enid, Grenada and Sardis, as well as the Ross Barnett Reservoir to the northeast of Jackson.

The coastline of Mississippi includes a series of bays separated from the Gulf of Mexico itself by the very shallow Mississippi Sound, which is fronted by the small islands of Petit Bois, Horn, Ship, and Cat, called (as a group) the Gulf Islands National Seashore.

For a closer look at the topography of Mississippi, view this topographic map 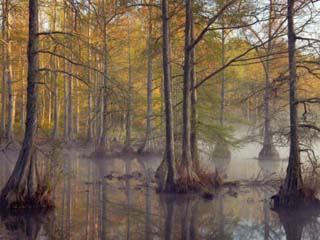 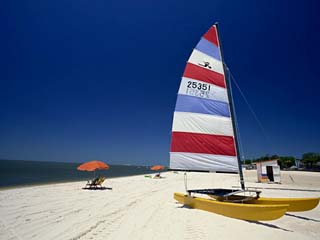 Mississippi Beach at Biloxi...
by Robert Francis
Buy This at Allposters.com