The lush, green islands of Hawaii are the visible tops of a chain of submerged volcanic mountains that stretch 3,100 miles from Hawaii, all the way to the Aleutian Trench in the North Pacific Ocean.

Excluding the largest islands (shown on the map), most are atolls; inactive stumps of volcanic rock, encircled by coral reefs.

Ironically in this tropical paradise the summits of the (sporadically active ) volcanoes of Mauna Loa and Muana Kea on the Big Island, are frequently snow-capped. Kilauea, the youngest volcano in Volcanoes National Park, still erupts occasionally, spewing lava and creating new land.


Other volcanoes of note includes Maui's Haleakala, considered active, but not currently erupting; Oahu's Diamond Head, the most famous landmark in the island chain is a large volcanic tuft cone formed by a series of explosive eruptions an estimated 100,000 years ago, and Mt. Waialeale on the island of Kauai - widely referred to as the (rainiest spot) on the planet, with over 450 inches of rain each year.

Rugged sea cliffs fringe the outer edges of many of the islands, with the Na Paili Coast of Kauai, southeastern edges of Maui and the north shore of Molokai the most dramatic.

Waimea Canyon on Kauai is one of the island's most dramatic landforms, and across the larger islands fertile mountain valleys, volcanic craters, deep canyons and waterfalls are also commonplace.

There are no sizeable navigated rivers in Hawaii, however the Anahulu on Oahu, the Wailua on Kauai and the Wailuku on the Big Island are the most significant small rivers.

Hundreds of narrow streams flow down from the volcanic summits, either to the sea or into the fertile valleys below. 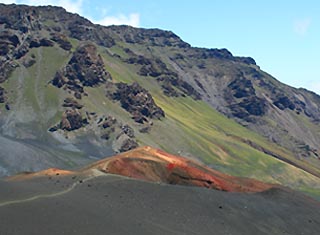 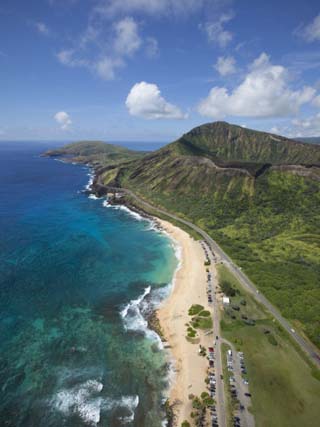 Koko Crater...
by Douglas Peebles
Buy This at Allposters.com