From the giant redwood trees of the northwest to the Mars-like landscapes of the southeast; from snow-capped mountain peaks to its fertile valleys - California presents (arguably) the most diverse series of landforms in all of the United States.

Fronted by the sandy beaches of its Pacific Ocean coastline, California's land quickly rises into the steep rocky cliffs and foothills of the Coastal Mountains.

The 462-mile-long Central Valley (including the San Joaquin and Sacramento Valleys) is positioned between those Coastal Mountain Ranges and the massive peaks of the Sierra Nevada Mountains in the east; within the Sierra Nevada stands Mt Whitney at 14,494 ft., the highest point in the 48 (contiguous) U.S. States.

Additional mountains ranges include the Klamath Mountains and Cascade Mountains in the north, and the Los Angeles Ranges, a series of mountains generally running west to east to the immediate north of the city of Los Angeles.

The Mojave and Colorado Deserts dominate the far south and southeast; this wide and generally flat expanse of land is punctuated by irregular mountain peaks. Death Valley, an arid, inhospitable and extremely hot desert area, runs along the eastern border with Nevada. Within it, the lowest point in all of the United States is found, (282 ft. below sea level).

Significant rivers include the Colorado, as well as the Sacramento and San Joaquin rivers in the Central Valley. Lake Tahoe is the most significant lake.

For a closer look at the topography of California, view this topographic map 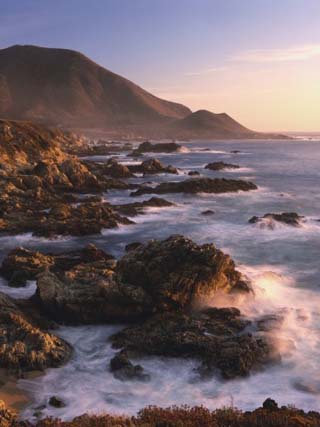 Rocky Coastline of Big Sur...
by Michael T. Sedam
Buy This at Allposters.com