While part of the US for over 100 years and larger in population than 22 states, Puerto Rico hasn't been integrated as a full US state, and as such, the population doesn't get to vote for president or have any representation in the congress of the United States. On top of this, with only 1663 kilometres from Miami to San Juan, Puerto Rico, the trip between the island and the continental US is only a 2.5 hour flight, much shorter than the 5 hours between Los Angeles and Honolulu.

Want to know how "The Isle of Enchantment" fits within the US? Check out these facts about the "51st State" to understand a little bit more about Puerto Rico's unique history and status.

The Lay of the Land

Puerto Rico is the second smallest of the Greater Antilles island group in the West Indies, with Cuba being the largest, and the Cayman islands being the smallest.

The other inhabited islands of Puerto Rico are Viecques and Culebra, but there are 140 other small islands or islets which belong to it.

Puerto Rico is about the size of the state of Connecticut, with a mountainous center, large coastal areas and hundreds of beaches, many of them spectacular. Puerto Rico is very densely populated, with about a third of its citizens living in the San Juan area on the north side of the island.

What’s the Deal With the U.S. and Puerto Rico?

First, a few words about Puerto Rico before it became a U.S. territory. Christopher Columbus explored it on his second expedition to the New World in 1493 and Spain held it for more than four centuries. On January 1, 1898, the Spanish gave Puerto Rico limited autonomy, but it was short lived.

That July, the U.S. invaded the island during the Spanish American War, which was fought in part over control of the Caribbean. By the end of the year, Spain had ceded Puerto Rico to the U.S.

In 1917, the United States made Puerto Ricans U.S. citizens, but it remains a territory and not a state. After WWII, the U.S allowed Puerto Rico to elect a governor and in 1953 declared it a commonwealth. Today, Puerto Ricans don’t pay income tax but they also don’t have congressional representation and can’t vote for President. Yes, it’s complicated.

It’s All In The Mix

Puerto Rico is a mash up of cultures. The original inhabitants were Taino, a tribe who were all but wiped out by the Europeans through disease and aggression.

Africans were brought to the island as slaves to work on the sugar cane plantations. The groups blended to create a local culture known as creole - but not the New Orleans kind. The word goes back to the 16th century and was used to describe anything and anyone with a mixed European and native heritage.

Today, more Puerto Ricans live in the U.S. than on the island, due to decades of people emigrating in search of economic opportunity. Islanders sometimes call emigrants to New York “Nuyoricans,” which is not always a compliment, and refer to themselves as “Boricuas".

They’ve been making rum, and lots of it, on the island since the 16th century. The Barrachina Restaurant claims that a former bartender created one of the most famous rum cocktails, the Pina Colada, in the 1950’s.

The local cuisine is called Cocina Criolla, or Creole Cuisine. Like the culture that devised it, it’s is a mix of Spanish, African and native ingredients. The Taino contributed yucca, peppers and corn. The Spanish brought olive oil, cilantro, beef and garlic. Africans used plantains and coconuts. Everyone took advantage of the seafood. Unsurprisingly, stews are a big part of Cocina Criolla.

The Sounds of Music

Cuba and Puerto Rico both claim bragging rights to the creation of one of today’s most popular Latin music genres– salsa. But the true birthplace is on another island - Manhattan. When emigrants brought Latin rhythms and percussion to the States, they fused them with American jazz and other popular music to create salsa.

Musical forms truly unique to Puerto Rico are Bomba, which was sung by African slaves in the cane fields since the 17th century, and Plena, which emerged from the barrios in the early 20th century. Plena is sometimes called a “singing newspaper” because the lyrics reflect contemporary events. Whatever the style, music is pervasive in Puerto Rico, performed in parks, clubs, concerts and family gatherings.

Hurricanes and Earthquakes, Oh My

The very word “hurricane” is derived from the Taino language. They hit Puerto Rico about every three or four years, almost twice as often as Florida. One of the most infamous was San Felipe II, a category 5 storm that struck in 1928. It killed more than three hundred people and destroyed more than twenty five thousand buildings.

The island also lies along a fault line and in 1918, a major earthquake struck, measuring 7.5 on the Richter scale and causing a twenty-foot tsunami. In 2014, seismologists detected more than fourteen hundred earthquakes, but few were strong enough to cause damage and most of them were too small to feel.

Not that great, actually. Puerto Rico has been struggling with recession for almost a decade, after successfully re-inventing itself, post WWII, from an agricultural society into an industrial one. The government instituted tax breaks to industries like pharmaceutical manufacturing, which is big in Puerto Rico, but it hasn’t done enough to kick the "dry spell".

Tourism is not what it could be, considering the beaches, the food, the music and the ease of travel. If you’re thinking of going, the local currency is U.S. dollars, not pesos, and business is conducted by American regulations.

How to Talk the Talk 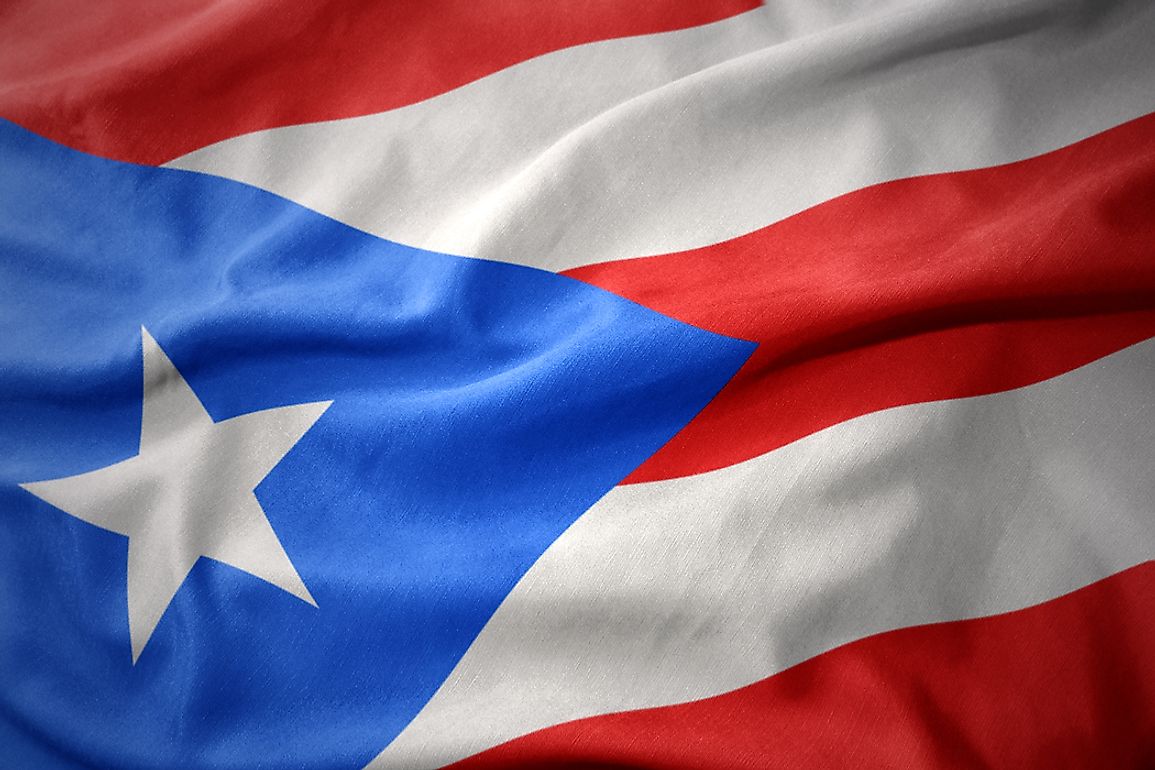 The flag of Puerto Rico.

The Puerto Rican motto is an odd one: “John Is His Name.” It may derive from the confusion over what the island was actually called. Christopher Columbus named it San Juan Bautista, after John the Baptist. The main city became Puerto Rico, or “rich port.”

Somehow, those two got reversed and by the mid 18th century, the city was called San Juan and the island Puerto Rico.

​8 Things You Didn't (and Should) Know About Puerto Rico