The Seven Summits are the widely recognized highest mountains of each of the seven continents. Summiting (or climbing) all of them is regarded as a mountaineering challenge, one accomplished by very few people.

Note that exact geographic definitions are often political, not geophysical, so there are some opinions expressed.

Please read the geography notes underneath the map regarding the two red triangles for Blanc and Puncak Jaya.

The generally accepted highest summit in Europe is Mount Elbrus (5,642 m or 18,510 ft). However, because the location of the boundary between Asia and Europe is not universally agreed upon, its inclusion in Europe is disputed by some sources, so Mont Blanc (4,810 m or 15,781 ft), lying on the border between France and Italy is seen by some to be the highest mountain in Europe.

The highest mountain on the Australian mainland is Mount Kosciuszko (2,228 m or 7,310 ft). However, some feel that the highest mountain on the Australia/Oceania continent is Puncak Jaya (4,884 m or 16,024 ft). However, it is positioned on the Indonesian province of Papua on the island of New Guinea, so we consider it part of Asia, and Mount Everest is the clear winner there. So what about New Zealand?

In spite of New Zealand having dozens of significantly larger mountains than Mt. Kosciuszko, it is not known why New Zealand summits are not included in the standard definition of the Seven Summits. For your information, the highest point in New Zealand is Mount Cook (Aoraki) standing at (3,754 m or 12,316 feet). 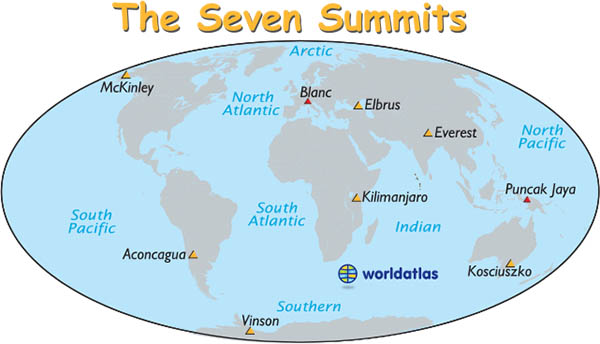