The Baltic Sea is positioned in Northern Europe and bordered by Sweden (a part of the Scandinavian Peninsula), Finland, Russia, Estonia, Latvia, Lithuania, Poland, northeastern Germany, and eastern Denmark and its numerous islands.

The definitive western end of the Baltic Sea is difficult to determine, as well as indicate on the map, but in general terms its waters flow on through Kattegat Bay into the Skagerrak Strait, and then merge with the North Sea.

Estimating the size of the Baltic Sea is based on where the sea actually ends, so all known measurements are estimates, at best. Wikipedia references a surface area of 377,000 sq. km, while Baltic Resources uses 375,600 sq. km. Average depth runs near 55 meters (180 ft.), while the maximum depth is measured at 459 meters (1,506 ft.).

The Kiel Canal in northern Germany is one of the world's busiest artificial waterways. International sea traffic uses it to connect between the North Sea and the Baltic Sea, thus saving hundreds of miles of additional travel time around Denmark, and the related high costs of transportation. 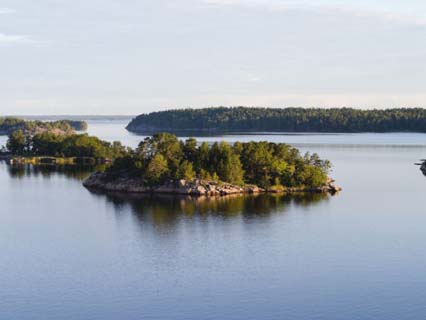 Small Islands in the Baltic Sea, Sweden...
by Panoramic Images
Buy This at Allposters.com