The White Sea, an extention (or inlet) of the Barents Sea, is located off the northwestern coastline of Russia.

The city of Arkhangel'sk was once one of Russia's main centers of maritime trade. Today, along with Murmansk on the northern edge of the Kola Peninsula, it's used as a naval and submarine base.

The White Sea-Baltic Canal was finished in the early 1930's, and it connects the White Sea with the Baltic Sea. Originally designed for the transportation of goods, its depth is to shallow for major ships, so it's now used for local transportation and tours.

Speaking of tours, winters are way to cold here, but summers are surprisingly mild and travelers do come here to visit the Solovetsky Islands and the famous Solovetsky Monastery, as well as interesting archeological sites and nature reserves. 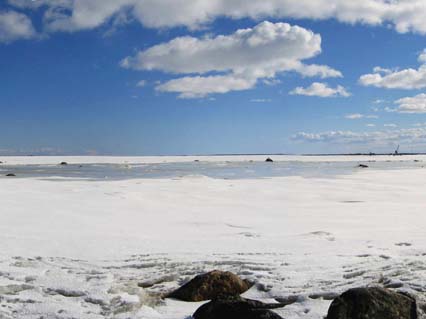 Coastline of the White Sea at Belomorsk, Russia...
Biergerry at en.wikipedia.org