The Gulf of Bothnia is the northernmost extension of the Baltic Sea.

Positioned in Northern Europe, it's bordered by Sweden (a part of the Scandinavian Peninsula) and Finland.

Finland's Aland Islands (literally thousands of them), bordered by the Archipelago Sea and the Sea of Aland, stand at the southern edge of the Gulf of Bothnia.

Estimating the size of the Gulf of Bothnia is based on where its waters actually end, so all known measurements are estimates, at best.

Numerous rivers drain into the gulf from both Finland and Sweden. Most of the northern areas freeze solid in winter, as its waters have less salinity than the southern reaches of the Baltic Sea.

Nasa photo of the winter ice 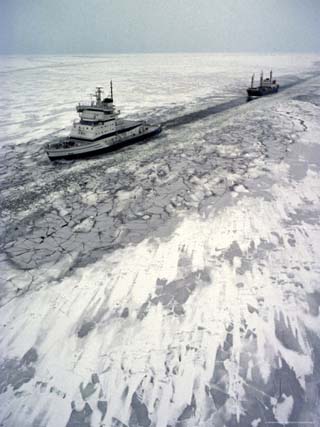 An ice-breaker makes its way through the Gulf of Bothnia...
by Brimberg & Coulson
Buy This at Allposters.com