Wyoming, like most of the western U.S. States, displays a broad-range of striking landforms that in many ways boggle the mind. In Wyoming, those would include the Devil's Tower, Fossil Butte, Grand Tetons and Yellowstone National Park.

In general terms the Great Plains of North America slope east from the Rocky Mountains, extending south from Canada, covering the eastern parts of Wyoming. Much of it is short-grass prairie land, with the Black Hills being the major exception.

As for the Rockies, over a dozen mountain ranges cover the west, including the snow-capped Absaroka, Grand Tetons and Wind River. The highest point (Gannett Peak) in the Wind River Mountains reaches 13,804 ft.. The Big Horn Mountains dominate the north-central area, while the rugged Laramie Mountains cover the southern and southeastern landscapes.

The Continental Divide (an imaginary line) indicates the absolute highest points of land, where on either side of same, rivers will flow downhill, east or west. That divide runs from northwestern Canada, south along the crests of the western Rocky Mountains of Wyoming, then south into Mexico, where it follows the peaks of the Sierra Madre Occidental. For example, the Snake river flows west while the Sweetwater River flows east.

Between the eastern and western mountains, several relatively flat basins are the major land features. These (land between mountain) almost treeless (plateaus) are arid and generally unproductive land. The biggest one, the Great Divide Basin, is located to the south of the Sweetwater River.

Wyoming has numerous man-made reservoirs, with the largest ones located on the North Platte River, to the south of Casper, and to the northeast of Riverton on the Bighorn River.

For a detailed look at the topography of Wyoming, view this map. 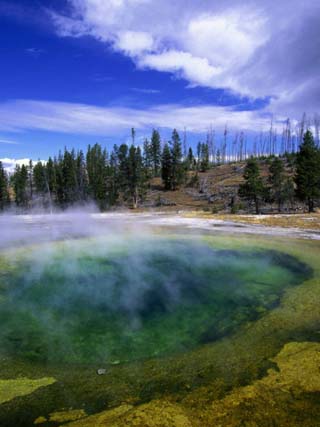 Yellowstone...
by Walter Bibikow
Buy This at Allposters.com