Much of Virginia is a hilly (heavily forested) mountainous landscape, one dominated by ranges of the Appalachian Mountains that extend through the western half of the state; literally covering its entire western border with Kentucky and West Virginia, and a small portion of its northern border with Maryland.

The significant mountains ranges within Virginia include the Allegheny Mountains, a range that stretches north into Pennsylvania, and the beautiful Blue Ridge Mountains that extend south through North Carolina, and on into Georgia.

The tallest peaks are in the southwest, where the highest point, Mt. Rogers, stands at 5,729 ft.

Named for the river that dissects it, the 150-mile-long Shenandoah Valley is nestled between the Blue Ridge and the Allegheny Mountains. It remains one of the state's most productive agricultural areas.

From the central hills, the land slopes through the Piedmont Plateau, then gradually to the Chesapeake Bay and the lowlands of the Atlantic Coastal Plain.

The Delmarva Peninsula occupies portions of three U.S. states: Delaware, Maryland, and Virginia. The peninsula is about 180 long, and nearly 71 miles wide. It's bordered by the Chesapeake Bay on the west, and the Delaware River, Delaware Bay, and Atlantic Ocean on the east. The peninsula's land is a mostly flat with a few low-lying hills. Sandy beach fronts the Atlantic Ocean.

Hampton Roads is one of the world's biggest and most vital natural harbors, and incorporates the mouths of the Elizabeth, James and Nansemond Rivers with several smaller rivers. It's notable for being a year-round ice-free harbor.

For a closer look at the topography of Virginia, view this topographic map. 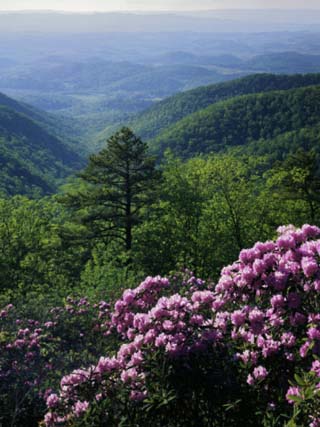 Blue Ridge Mountains...
by Charles Gurche
Buy This at Allposters.com