To the immediate west of those mountains (stretching south to north) the Appalachian Valley is a series of lower ridges, hills, and very fertile farmland.

The Cumberland Plateau, a run of flat hills, valleys and round top mountains, stretches north from Chattanooga to the Kentucky border. Lookout Mountain (1,850 ft.), to the southwest of Chattanooga, provides views of seven states on a clear day.

West of the Cumberland Plateau, the somewhat flat highlands stretch east, and then drop down into the Nashville Basin, an area of productive farmland.

The Gulf Coastal Plain extends across the southern states, on into southern Illinois. In Tennessee the plain begins as hilly land to the west of the Tennessee River, land that slowly levels-out as it approaches the state's western edge. In the southwestern corner (near Memphis) it becomes a swampy lowland flood plain ending along the steep bluffs fronting the Mississippi River Delta.

In this state of rivers, major ones include the Cumberland, Tennessee, and of course, the Mississippi. The Clinch and Duck are additional rivers of note.

Significant lakes (some used as storage basins) are found across Tennessee. Kentucky Lake is the largest man-made lake in the eastern United States.

For a closer look at the topography of Tennessee, view this topographic map 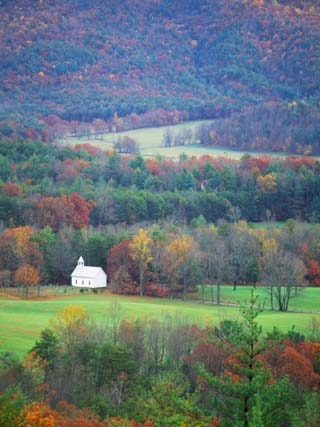 Tennessee landscape...
by Cody Wood
Buy This at Allposters.com