Cincinnati is a city found in Ohio, The United States Of America. It is located 39.16 latitude and -84.46 longitude and it is situated at elevation 192 meters above sea level.

Cincinnati has a population of 296,943 making it the 3rd biggest city in Ohio. It operates on the EDT time zone, which means that it follows the same time zone as Columbus.

Located directly across the Ohio River from Covington, Kentucky, Cincinnati is one of the State of Ohio's larger cities along with Columbus and Cleveland.

One of America's early boomtowns, Cincinnati expanded rapidly in the early 19th century to become the first major inland city in the country. Today, as then, it's renowned for its hard-working, public spirited citizens.

This is a city of dedicated sports fans (some say fanatics), as baseball's Cincinnati Reds and football's Cincinnati Bengals are hometown teams. Other major attractions for locals and visitors include the Cincinnati Tennis Masters, the city's annual flower show, and its German-oriented Oktoberfest, the largest one in North America. 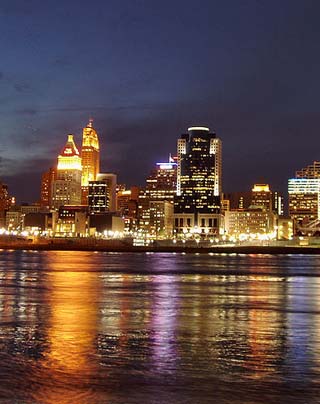 Cincinnati has a population of around 297397, of which 141208 (47%) are male and 156189 (52%) are female. The average age of the inhabitants of Cincinnati is 35.66, meaning that the average person is below the national median age of 37. For every male, there are approximately 1.11 females, meaning that the population is relatively evenly distributed between males and female(s).

The median income of households in Cincinnati is $33604.00, meaning that most of the households are above the poverty threshold for families of three. Of the total population, 17.70% of households reported an annual income of less than $10,000.

Most Popular Cities in Ohio