Directly to the east of those hills and mountains, the Puget Sound Lowlands stretch south from the Canadian border to the Columbia River. This stretch of land is home to Washington's major cities.

Puget Sound, lying to the west of Seattle, is a body of ocean water that provides access to the Pacific Ocean through the Strait of Juan de Fuca. It contains numerous channels, estuaries, inlets and islands - including the San Juan.

East of those lowlands the majestic snow-capped Cascades rise into the sky. This range of (volcanic in origin) peaks includes Mt. Rainier, Washington's highest point, as well as many other major mountains including Mt. Adams, Mt. Baker, Glacier Peak, and Mt. St. Helens of 1980 eruption fame. These heavily forested mountains are drained by dozens and dozens of small rivers, and contain many cold water lakes.

The Columbia Plateau extends south from central Washington into Idaho and Oregon. Formed by ancient lava flows, it's a landscape of deep, wide valleys and rugged mountains, including the Blue.

In the northeast the Rocky Mountains slice across the state, extending into Canada. The deep-valleyed Columbia Mountains are the most significant range.

Washington's most important river is the Columbia. It rises in British Columbia, Canada, then flows south through the state, forming most of its natural border with Oregon.

Other rivers of note include the Okanogan and Snake. The Baker, Chelan and Ross are lakes of note.

For a detailed look at the topography of Washington, view this topographic map. 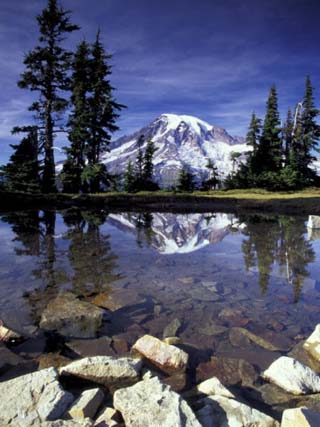 Mt. Rainier...
by Jamie & Judy Wild
Buy This at Allposters.com