Vermont is dominated (south to north) by the wooded Green Mountains. This northern range of the Appalachain Mountains includes more than 200 mountains over 2,000 ft. in elevation. The tallest one is Mt. Mansfield, Vermont's highest point at 4,393 ft.

Lake Champlain, covering Vermont's northwestern border with New York, is the largest lake in New England, and the sixth largest lake in the country. Lake Memphremagog, in the far north, is the state's second largest lake.

Rock of Ages, a quarry just outside of Barre, is one of the world's largest sources of granite.

Significant rivers include the Connecticut, running along its entire eastern border, and the Lamoille, Otter Creek, West, White and Winooski rivers.

For an accurate look at the topography of Vermont, view this topographic map. 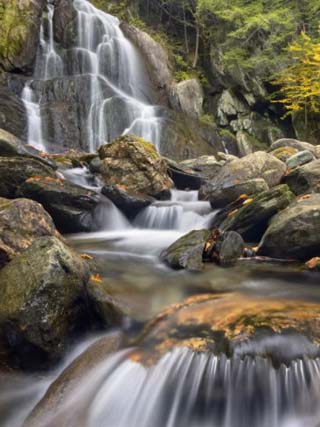 Moss Glen Falls...
by Edwardes Guy
Buy This at Allposters.com