Almost totally covered by mountains, most of the state is a series of rolling hills, plateaus and ridges, punctuated by valleys.

Over 50% of the land is still covered by forest land and the only lowlands are in the southeast.

The Appalachian Mountains slice through the center of Pennsylvania, with the Allegheny and Pocano Mountains, the state's most significant subranges. The highest point in the state is Mt. Davis, at 3,213 ft.

Pine Creek Gorge - often called the "Grand Canyon of Pennsylvania" - is 50 miles in length, and over 1,000 ft deep in places.

Blue Mountain is a 150 mile long ridge that forms part of the the eastern edge of the Appalachian mountain range.

Pennsylvania is home to more deep and useful rivers than any other U.S. State. The Delaware, along its eastern borders, may well be the most valuable.

The Delaware Water Gap on the border of Pennsylvania and New Jersey was formed as the Delaware River carved a deep path through a ridge of the Appalachian Mountains on its way to the sea.

Other very significant rivers include the Allegheny, Ohio, Monongahela and Susquehanna.

For a closer look at the topography of Pennsylvania, view this topographic map 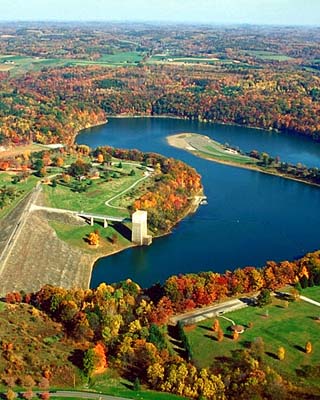