The Great Plains of North America slope east from the Rocky Mountains, extending south from Canada, through Nebraska, and on into Texas.

The rolling plains (hills) of eastern Nebraska (farm country) are crisscrossed by numerous small rivers and streams. In the central plains, the land is more rugged and quite hilly.

In western Nebraska much of the land is blanketed by the Sand Hills, a large area of rolling sand dunes (formed by wind) and mostly covered by vegetation. In the far northwestern corner of the state stands a small area of unusual formations of sandstone and clay (The Badlands) that then stretch into South Dakota.

Chimney Rock, a prominent column of clay and sandstone, resembling a tall factory chimney, is located to the southeast of Scottsbluff.

In the elevated high plains of western Nebraska stands the state's highest point; it's not a mountain after all, but rather, an elevated rise of pasture land. The state's lowest point is along the Missouri River.

The two major rivers of Nebraska are the massive Missouri along its eastern borders with Iowa, Missouri, and South Dakota; and the Platte River system, a tributary of the Missouri River, that drains a large portion of Nebraska and the Great Plains.

For a closer look at the topography of Nebraska, view this topographic map 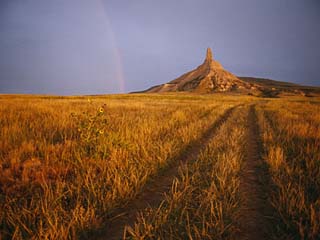 Nebraska landscape...
by Michael S. Lewis
Buy This at Allposters.com 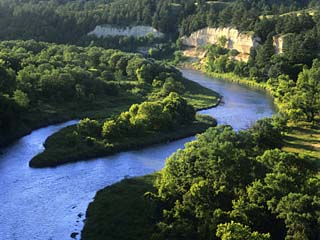 Niobrara River...
by Chuck Haney
Buy This at Allposters.com