During the Ice Age, the land now called Minnesota was totally covered by glaciers. When those masses of ice retreated (or melted) they left behind a rocky and pockmarked landscape of rolling hills and plains, tens of thousands of freshwater lakes (in all sizes) numerous rivers and countless small streams.

In the west along its border with North Dakota, the Red River Valley stretches from the Canadian border to the edges of South Dakota. This relatively flat strip of land is Minnesota's most productive farmland.

From Bemidji east to Grand Portage, and north to its border with Canada is the state's most rugged landscape. This area of Minnesota is dominated by the Mesabi Range of low mountains (hills), and the Misquah Hills, where the state's highest point is located.

This large stretch of land is frequently referred to as the Boundary Waters Region, a wilderness of lakes and rivers carved into the bedrock by the movement of glaciers, and surrounded by thick green forests.

Along the southeastern border with Wisconsin, the St Croix River and Mississippi River now flow through mostly deep, rugged valleys, all carved (over the centuries) by the relentless movement of water.

Minnesota's most important river is the Mississippi; it rises in northwestern Minnesota, then flows south to the Gulf of Mexico, just below the city of New Orleans. It is a significant transportation artery and when combined with its major tributaries (the Missouri and Ohio rivers) it becomes the third largest river system in the world at (2,339 miles) (3,765 km) in length.

Other rivers of note include the Minnesota, Rainy, Red and St. Croix. In this "Land of 10,000 Lakes" some of the most significant include Lake of the Woods (with over 14,000 counted islands) Red Lake (both upper and lower) Mille Lacs, and of course Lake Superior.

For a detailed look at the topography of Minnesota, view this map. 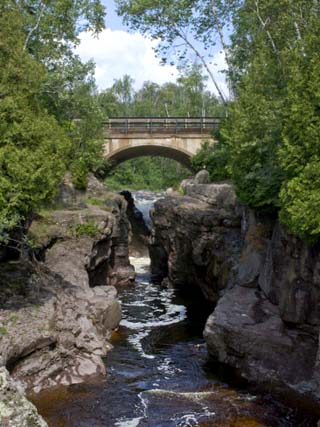