In the north and northeastern regions of Alabama, and along much of its border with Georgia, the lands are hilly and mountainous.

The central, west and southwestern areas are covered by rolling grassland plains that slope gently west into Mississippi, and south to the Gulf of Mexico.

The Cumberland Plateau in the north is an elevated, somewhat flat area, dissected by the massive Tennessee River system and many small tributaries.

The Piedmont Upland is dominated by several flat-topped mountains, while the Piedmont Plateau in the southeast is generally less elevated land, averaging about 1000 ft. above sea level.

The Appalachian Mountains, about 1,500 miles in length, extend from north-central Alabama, up through the New England states and on into the Canadian provinces of New Brunswick, Newfoundland and Quebec.

Alabama is heavily wooded, and in fact, forests cover almost 65% of available land. Several mountains of size stand in northeastern Alabama, with Lookout Mountain the most prominent. Further south in the Talladaga Range of the Appalachians, the highest point in the state, Cheaha Mountain, stands at 2,407 ft.

Underground caves are found throughout Alabama. Marshland and swamps are common in the far south along the Coastal Plain that fronts the Gulf of Mexico and stretches on into Florida.

Alabama contains over 1,350 miles of navigable rivers, more than any other continental U.S. State. Major ones include the Alabama, Chattahoochee, Conecuh, Mobile, Tennessee and Tombigbee.

For a closer look at the topography of Alabama, view this topographic map 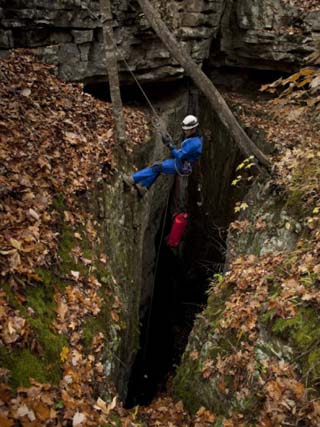 Underground cave...
by Stephen Alvarez
Buy This at Allposters.com