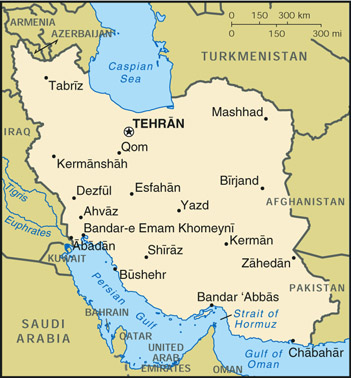 Iran formerly known internationally as Persia, is a Southwest Asian country located in the geographical territories of the Middle East, Southern Asia, Central Asia and the Caucasus.

As seen on the Iran CIA map it has a 5,894.00 km border with Afghanistan, Armenia, Azerbaijan, Iraq, Pakistan, Turkey and Turkmenistan.

It is the 18th largest country in the world in terms of area at 1,648,195 km², Iran is about the size of United Kingdom, France, Spain and Germany combined. It has a population of over seventy million people.

Iran is one of the world's oldest continuous major civilizations, with historical and urban settlements dating back to 5000 BCE. Throughout history, Iran has been of geostrategic importance because of its central location in Eurasia.