Santa Fe is a city found in New Mexico, The United States Of America. It is located 35.69 latitude and -105.94 longitude and it is situated at elevation 2137 meters above sea level.

Santa Fe has a population of 67,947 making it the 5th biggest city in New Mexico. It operates on the MDT time zone, which means that it follows the same time zone as Albuquerque.

Welcome to Santa Fe, New Mexico, the third oldest surviving American city in the United States founded by European colonists, behind the oldest St. Augustine, Florida. It is also the most elevated state capital in the country.

At a lofty 7,000 feet above sea level, this American legend blends scenic beauty, cultural diversity, and some of the country�s finest arts and musical venues into an amazing travel destination. 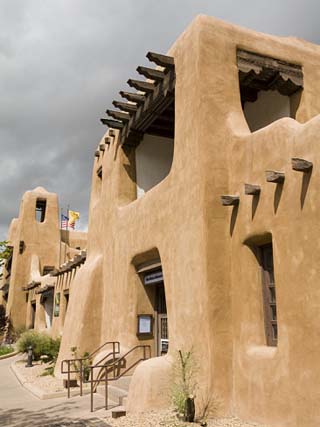 Be it art, food, history, or nature, the stunning city of Santa Fe is unmatched. In this mountain hideaway the air is so clean and the sky is so clear that you may never want to leave. In fact, many first-time visitors now live here fulltime.

Santa-fe has a population of around 83008, of which 39410 (47%) are male and 43598 (52%) are female. The average age of the inhabitants of Santa-fe is 41.14, meaning that the average person is above the national median age of 37. For every male, there are approximately 1.11 females, meaning that the population is relatively evenly distributed between males and female(s).

The median income of households in Santa-fe is $50737.00, meaning that most of the households are above the poverty threshold for families of three. Of the total population, 7.50% of households reported an annual income of less than $10,000.

Most Popular Cities in New Mexico