Most of the vegetation and agricultural areas are in the lowlands close to the coastline.

Iceland's most distinctive features are the glaciers that cover over 4,600 sq. mi (11,922 sq. km) or 11. 5% of the total area of the country. During the past few decades, however, they've markedly thinned and retreated owing to a milder climate.

By far the largest of the glaciers is the Vatnajokull in southeast Iceland, with an area of 3,240 sq. mi (8,400 sq. km). The Vatnajokull glacier is equal in size to all the glaciers on the European mainland put together, and reaches a thickness of 3000 ft. (1 km).

The highest point in Iceland is Hvannadalshnukur, a peak on the edge of the Öræfajökull Volcano, which rises 6,922 feet (2,110 m).

And speaking of Volcanoes, on March 21, 2010, the Eyjafjallajökull Volcano in southern Iceland erupted for the first time since 1821, forcing 600 people to flee their homes. Further eruptions in April forced hundreds of people to abandon their homes. And in fact, the resultant cloud of volcanic ash brought major disruption to air travel across Europe. 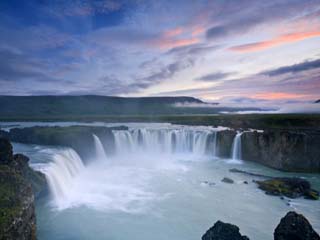