The Republic of the Marshall Islands (RMI) is about midway between Hawaii and Australia.


First settled by Micronesian navigators, they were subsequently controlled (some say exploited) by Spain and Germany, and finally by Japan.

Prior to the beginning of World War II, the Japanese fortified some of the atolls as a defensive measure. When that war ended with Japan's defeat, the United States was given total control.

For almost 40 years the islands were under U.S. administration as the easternmost part of the United Nation's Trust Territory of the Pacific Islands.

The United States used some of these isolated atolls for nuclear testing between 1947 and 1962. Long term affects are yet to be totally understood, and damage claims are still in the courts to this day.

In 1986 the islands gained independence under a Compact of Free Association with the United States. Under the terms of that agreement, the U.S would provide significant financial aid, that to date now exceeds $1 billion.

The Marshall Islands include the Ratak (sunrise chain) and Ralik (sunset chain), two parallel chains of 29 coral atolls, thousands of tiny islets, and hundreds of very small low-lying islands, all scattered over a wide area of the Pacific Ocean.

The Kwajalein Atoll, with a huge central lagoon, is the largest coral atoll on the planet. The U.S maintains a strong military presence on Kwajalein, and from here controls a missile testing range.

The clear-blue waters, surrounding the Marshall Islands, boasts of over 800 species of fish and 160 species of coral. The numerous offshore World War II shipwrecks add another dimension to local scuba diving and snorkeling attractions.

The flag of Marshall Islands was officially adopted on May 1, 1979.

The islands, long a part of the U.S. Trust Territory of the Pacific Islands, gained their independence in 1979, and hoisted this striking flag. The orange and white stripes are symbolic of the two side-by-side island chains within the Marshalls, the Rotok and Ralik. The blue field represents the surrounding Pacific Ocean, and the white star has a point for each district - 24 in all.

Located in the northern Pacific, the Marshall Islands consist of 24 low-lying coral atolls comprising 1,156 individual islands and islets. These atolls and islands form two groups: the Ratak Chain and the Ralik Chain (meaning "sunrise" and "sunset").

The general landscape is sandy as most of these islands rise only a few feet above sea level, with the highest point being an unnamed hill on Likiep which peaks at only 32 ft. (10 m).

ATTRACTIONS: (a few major)
The picturesque Marshall Islands are arguably one of the most interesting places in the world to visit.

The pristine islands and their thriving coral reefs offer endless opportunities by way of water activities and outdoor recreations, with Enoko Island being a popular destination for day trips. Laura Beach, the Jaluit Atoll, and Bikini Atoll are also popular stop-offs.

Weather is hot and humid throughout most of the year, with a consistent average daily high temperature right at 80°F.

Rain falls throughout the year and is heaviest in the southern atolls where totals do approach 160 inches per year. In the north, 20 inches per year is the norm. The rainy season is from May to November. 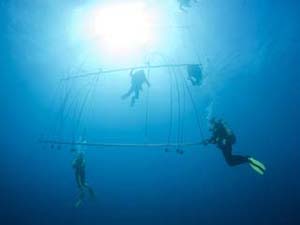 Divers off the coast of the Marshall Islands...
by Reinhard Dirscherl
Buy This at Allposters.com 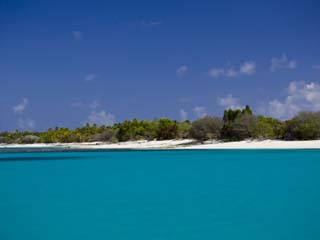 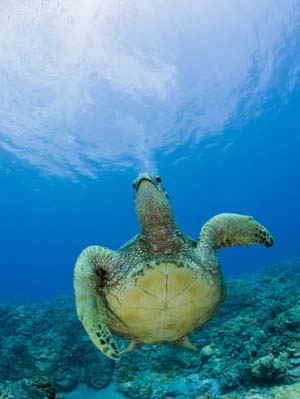 A green sea turtle, Marshall Islands...
by Reinhard Dirscherl
Buy This at Allposters.com 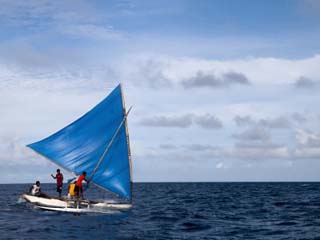 A traditional outrigger canoe, Marshall Islands...
by Michele Falzone
Buy This at Allposters.com