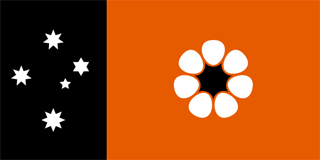 Adopted in 1978, the current flag of the Northern Territory has officially been in existence since 1911, however they could not use it until self-government was established. 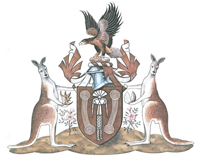 The Northern Territory coat of arms was granted on September 11, 1978, and features all of the territory's state emblems: the Sturt's Desert Rose, Red Kangaroo and Wedge-tailed eagle.

Also incorporated are symbols of the indigenous Australian culture and history, with the shield being a representation of an Aboriginal painting, and the crest displaying a Wedge-tailed eagle atop a tjurunga (an Aboriginal ritual stone).