In the New England Uplands of the northwest, Jerimoth Hill, the state's highest point, stands at only 812 ft. above sea level.

About 12 miles south of the mainland, isolated Block Island is known for its windswept land and rugged coastal bluffs.

Narragansett Bay, a northern extension of the Atlantic Ocean, is Rhode Island's most distinctive feature. It contains three major islands, including Aquidneck (or Newport), Conanicut and Prudence.

Significant rivers include the Blackstone, Pawcatuck, Pawtuxet, Sakonnet and Wood. The Scituate Reservoir is the largest inland body of water.

For a closer look at the topography of Rhode Island, view this topographic map. 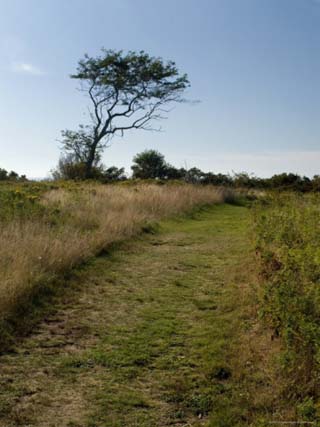 A grassy pathway on Block Island...
by Todd Gipstein
Buy This at Allposters.com