Montana's western third is covered by over 50 individual ranges of the Rocky Mountains, with the most significant being the Big Belt, Bitterroots, and Lewis. Glacier National Park, considered the most rugged place in the continental 48 states, is home to numerous (unclimbed) ice covered peaks.

The Continental Divide (an imaginary line) indicates the absolute highest points of land, where on either side of same rivers will flow downhill, east or west. That divide runs from northwestern Canada, south along the crests of the Rocky Mountains of Montana, then south all the way into Mexico, where it follows the peaks of the Sierra Madre Occidental.

The Great Plains of North America slope east from the Rocky Mountains and cover the balance of Montana's land; rolling hills, wide river valleys and acres of prairie grass cover the landscape for as far as the eye can see.

The Gallatin, Jefferson and Madison Rivers come together to form the headwaters of the Missouri River as it rises in southern Montana and flows, in a winding path, all the way to St. Louis, Missouri, a distance of over 2,500 miles.

The Yellowstone River, beginning in southwestern Wyoming, flows across the state into North Dakota, where it joins the Missouri.

Smaller rivers and streams are commonplace, as well as alpine lakes, tundra and glacier ice in the higher elevations of the northern mountains.

For a detailed look at the topography of Montana, view this topography map. 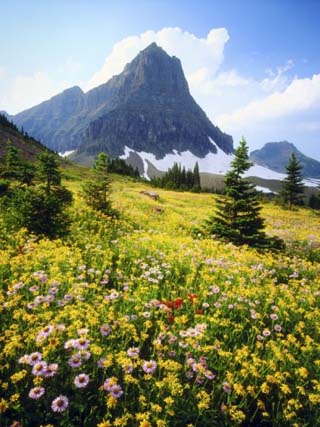 Montana landscape...
by Christopher Talbot Frank
Buy This at Allposters.com