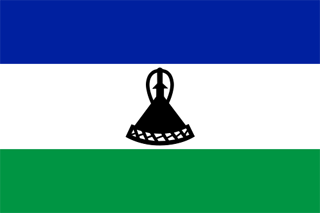 The current Lesotho flag was officially adopted on October 4, 2006.

It features a horizontal blue, white, and green tricolour with a black mokorotlo (a Basotho hat) in the center. The design, introduced to honor the country's 40th anniversary of independence, reflects a peaceful future for the country. 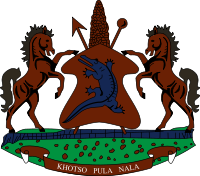 Adopted on October 4, 1966, Lesotho's coat of arms contains two Basutho horses supporting a Basotho shield. A crocodile is displayed on the shield, and an assegai and knobkierie are crossed behind.

The national motto "Khotso, Pula, Nala" ("Peace, rain, prosperity") is featured on a ribbon below.